Excellency in science does not depend solely on the amount of talent one has. Healthy competition, based on peer review, trustful and effective collaboration and the amount of grant money available to the researchers are playing an important role in providing the appropriate ingredients for high-level research. We need to look into ways to tighten the collaboration among UH researchers and submit together larger scale grant proposals that will enable us to compete for the biggest possible… Continue

It is too often in our lives that when we make up our minds to do something out of the ordinary, beyond the boundaries of our comfort zone, it leads to even greater things beyond our boldest visions when we made that original decision.

When weighing the different options that come with the territory we give up something in our lives to pursue what we love the most to do. A price is indeed paid whether large or small but a price is exacted from us somehow; leaving one’s immediate… Continue

Amazon announced last night that it bought Zappos for about 10 million Amazon stock, worth $807 million, and $40 million in cash and stock to Zappos employees.

In the following video, Amazon CEO Jeff Bezos tells an interesting story of what he has learned and why Zappos is a great fit for Amazon. It seems that Amazon bought Zappos because they have the same values (i.e., customer… Continue

This isnʻt much of a blog entry, but given the subject matter of this website I thought I would mention a brief news snippet I read in todayʻs Honolulu Star-Bulletin, it provides,

A blind business owner from Honolulu has filed a complaint against the U.S. Small Business Administration over access to its Web site.

iPhone coming to China as soon as September of this year!

So I read on the news yesterday, that Apple and a Chinese cellular network company (Unicom) has finally signed a deal to release the iPhone in China!

However, a lot of the news reports are saying that these Chinese iPhones won't have Wifi capabilities. I'm slightly confused about what this actually means: is it just the wifi chip that's restricted, or are the 3G/Edge… Continue

Well, it’s official. The Governor did not veto the Legislature’s Bill 199, so Hawaii’s Investor Tax Credit for high technology companies has now been scaled back from a maximum of 200% to “only” 100% return of high tech investment through tax credits, and the credits will now be claimable at no more than 80% of State income tax liability per year. Actually, the scaling back of benefits was not so bad. Rather, it was the way the whole tax credit program has been conducted over the past 10 years,… Continue

Swearing to Cope with Pain

Man, it has been a while since I last posted. I wanted to write about all sorts of things. Like successfully installing R for OpenSolaris using packages. Maybe about the uncertain future for OpenSolaris, now that Oracle pwns that. Maybe about coffee (see… Continue

I was extremely ecstatic last night when I saw that some staff members at SlideToPlay.com were playing our game last night, and ranked second on the high score server! You can see the high score list at: http://www.cocoslive.net/game-scores?gamename=Fireworks%20Fun

Then when I checked it later today, not only did they score #1 with a score of 61,100 (with a total playing time of 8 minutes),… Continue

How has the State's moves on ACT 221/ SB199 already affected your company?

A small group of folks were invited by the Governor's office to discuss the potential veto of SB199. I would be very interested in knowing if any tech companies have already been negatively or positively affected by the potential passing of this bill.

For example, were you looking for funding but SB199's threat has killed your chances due to uncertainty?

I don't want a pro/con debate on SB199 here. I would… Continue 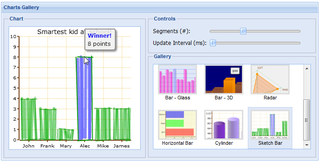 An introduction and a request.

Thereʻs a very good chance that you have no idea who I am. My name is Nathaniel Kinney.

At this point, you may be wondering, why the heck does this Nathaniel Kinney guy want to know and who the heck… Continue

Developing and Publishing an iPhone App

As some of you may know, my friend and I have published our first iPhone game
Fireworks Fun a few days ago. Although that wasn't my first iPhone app, I still learned a great deal from it. The iPhone SDK is extremely large and there just doesn't seem to be enough time to learn everything and develop at the same time! The bad (or good) thing is, developing for the iPhone is much more than just mastering the SDK; there are so many other aspects to iPhone development. I… Continue

Average software developer often juggles multiple projects at a time. One of common challenges is keeping track of time properly, especially when 'context switching' from one project to another. A quite useful tool for time tracking is
Google Calendar. Here is a list of most notable features: - Free and available with GMail acount - Syncs with CalDAV enabled clients (Apple iCal or Mozilla Sunbird) - Syncs with Windows… Continue

My new iPhone app, named Fireworks Fun, is finally in the app store today! It was almost going to be too late, since as you can see from the title we were trying to target audiences on July 4th :)

The dev time was intense for this since we started developing this in early June, after my graduation. I thought of the idea of making an iPhone app for July 4th before May since that would be one of the best ways to get exposure for an app. However, there just wasn't enough free time to… Continue I first met Ken on TechHui. He was an early member and a frequent participant in our groups and forums. I was intrigued by his company's product, Soundpaper, which encodes audio in high density barcodes. In Japan I frequently see bar codes used to encode URLs that can be read by mobile phone cameras. You find them everywhere from vending machines to magazines. The user points their mobile camera at the barcode to access media (sound, image or video) over the network. Soundpaper is… Continue