Developing and Publishing an iPhone App

As some of you may know, my friend and I have published our first iPhone game
Fireworks Fun a few days ago. Although that wasn't my first iPhone app, I still learned a great deal from it. The iPhone SDK is extremely large and there just doesn't seem to be enough time to learn everything and develop at the same time! The bad (or good) thing is, developing for the iPhone is much more than just mastering the SDK; there are so many other aspects to iPhone development. I thought it might be interesting to discuss some of these. The first important aspect I want to talk about is the User Interface look and feel. Although most developers do understand its importance, many seem to just overlook it. Functionality of an app is definitely important, but what sales an app are its looks. When you look at a software, if there's some nice artwork, gradient, that makes the UI look clean and the graphics look amazing, users would instantly want to try it out. Users don't associate software with books, so "Don't judge a book by its cover" doesn't really work here in the app store (unfortunately or not). In addition, the "feel" for the app must be right. Is it snappy and responsive? Does it take forever to load? Are there the right indications that something is happening? Getting an user to try/buy your app based on its look is the first step into the door, but if it doesn't feel right, the user may not use it again. Having long-term users and fans of your app could go a long way, such as establishing a reputation or getting more exposure for your app.

Another important aspect is Marketing. Although the iPhone app store is still relatively new, it is overflowing with a large number of apps now. There are new apps that get submitted everyday, and so many of them just get sank to the bottom. Like all successful software, you need marketing to ensure words of your app gets out. Some approaches people have used are paying a 3rd party to advertise your app (AdMob), using social networking and viral marketing strategies to publicize your app(Check out Facebook Connect), and even just going on forums and giving away free copies of your app via promo codes. Although none of these are a sure way of making your app succeed,
not marketing is almost a sure way of making your app fail. Ideas are everywhere and the app store has enough implementations of these ideas, but not enough marketing for these implementations. The next important aspect is keywords. Basically, when a user searches for an app in the app store, the "search words" that the user enters is not only matched to app titles but also the descriptions of an app. So of course, you want to include as many keywords as you can that are related to your app inside the app description. However, you do not want your app title to be composed of just common keywords. For example, our app "Fireworks Fun" is composed of two commonly used keywords. When "Fireworks Fun" was first released, we had to scroll three pages in the search before we could find it! (Luckily we had quick reviews to raise up our search rank quickly.) Thus, a more unique name with a good description would be a better strategy. Also, localizing your app description could also help yield more hits from different countries. This is especially true for Japan since the number of iPhone users there are sky-rocketing, and there are not as many fluent English speakers there as Europe. 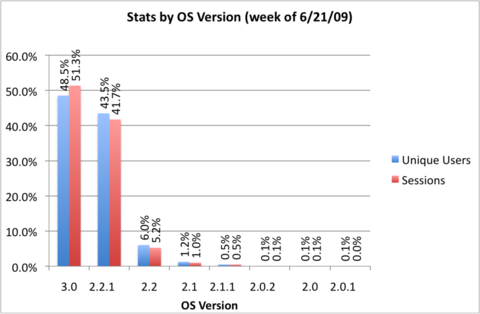 The last final aspect about iPhone development I want to talk about for today is getting to know more about your users. Does the users use a certain feature? How long did they use it for? Which areas lacks attention from the user? Because the iPhone provides a completely different experience than anything else today, analyzing your users' behavior could help you think of a better experience for the user. One prominent tool is Pinch Media. With Pinch Media, you could find out all of the things mentioned above, and some additional interesting usage info about your users. That includes the number of users that have "pirated" your app. There is definitely still a lot more to talk about, but this is a good chunk to digest, so I'll stop here for today. My conclusion is that although the idea generation and implementation of iPhone apps are still a challenge, making a successful app in a saturated market requires much more than that now :) - Sherwin

Comment by Daniel Leuck on July 6, 2009 at 6:20pm
You must have done a good job with Fireworks Fun because Mika was glued to her iPhone last night for an hour trying to get in the top 5 :-) Great post. Most iPhone dev posts concentrate solely on the coding. Its nice to see a post about the usability aspects, marketing and analytics.


In addition, the "feel" for the app must be right. Is it snappy and responsive? Does it take forever to load? Are there the right indications that something is happening? Getting a user to try/buy your app based on its look is the first step into the door, but if it doesn't feel right, the user may not use it again.