With 37% of the world's blog posts being in Japanese, its surprising that few people outside the country know it has the
largest and
most active blogging culture in the world. Blogging has also become a crucial social media tool in Japan, as in the US, for individuals and businesses to promote their services and products. Blogs in Japan take on different shapes and forms. There are themed blogs, comic blogs, picture blogs, micro-blogs, anonymous blogs, voice blogs....and the list goes on. I'll probably introduce a few unique blogs in the future but for this post, I thought I would introduce Ameblo, the most popular blogging platform in Japan and talk about the culture and features surrounding Ameblo. Ameba (Ameblo) Ameblo is a very popular blogging platform because the system is easy to use, and it benefits from a sizable established community. According to
one study, Ameblo has the largest share in the blogging platform market followed by FC2 and Yahoo! Japan blogs. Ameblo is the mainstream choice. My wife is an avid user, as are most of my non-techie friends in Japan.
Features Ameblo comes with almost every feature you would expect to see in the US. You can customize the look of your blog either by selecting templates or by editing the css. The platform provides comprehensive analytics to help you keep track of your visitors. Ameblo also has numerous features to enhance communication within the blogging community such as messaging and gift giving. However, I feel that what separates Ameblo from other blogging platforms is its extended network. This network elevates Ameblo from a simple blogging platform to a full scale social network and, more importantly, it makes it fun.
Extended Network Once you enter Ameblo, it's sort of like being part of the Google app sphere with all of its free applications. You can instantly access other services in the Ameba network, and many of these are inter-connected. For instance, when I signed up for my blog at Ameblo, I was also given access to
Ameba Pigg, a service to create cute avatars. Pigg itself is a complex network that allows you to create, dress and socialize with other members of Ameblo. You can go shopping with Amebla's virtual currency and buy clothing or items. What is cool is that the services are inter-connected. If I go on Pigg and buy a new set of clothes, then my avatar picture on my blog is also updated with those new items. Ameba also offers groups,
forums,
gift sending services ,
news,
video ,
woman's networks,
collaboration services and many more services. So in a nutshell, with Ameba, you have your own blog and through that blog and Ameba's extended services, you can easily engage in social networking.
Interesting Features to make blogging fun 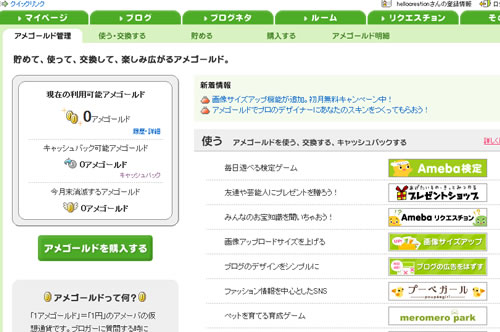 Ameba Gold - Virtual Currency Ameba Gold is a virtual currency concept in which you can build your wealth through actively blogging or participating in their various services. For instance, I see my wife often buying virtual gifts for a fellow blogger with the currency she acquired. You make your gold by blogging, answering questions at their Q&A platform and by adding affiliate links to your website. There are many incentives to making gold on Ameba. Here are just a few of the ways in which you can use gold: - Buy virtual gifts for friends - Buy and play fun games that Ameba provides - Remove advertisements from your blog - Increase the file upload size for photos on your blog - Exchange Ameba gold for real Japanese yen. The last feature is of particular interest. The fact that you can engage in social networking activity and exchange that for real currency is obviously very appealing. I don't think you can make a fortune, but it certainly encourages participation. 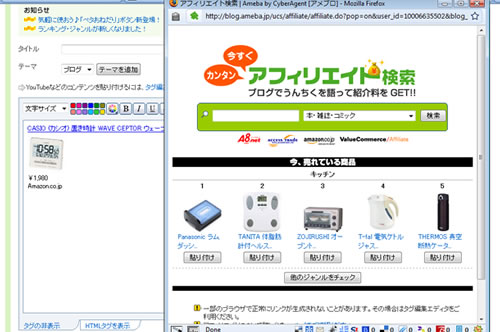 Integrated Affiliate Marketing Ameblo is already tied up with the major affiliate players such as ValueCommerce and A8 in Japan. Within their text editor, there is a button for affiliate ads that brings out a search for various affiliate advertisements. You can quickly do a search for any subject and copy and paste a relevant advertisement into your blog post. Emoticons (^_^) Japanese are all about emoticons. Here is a typical blog post in Japan.

Lots of smiles, hearts and kisses. We don't see this in the US but it is pretty important feature to have in social networking in Japan. Ameblo offers a system to include emoticons straight from the text editor. You can easily search and find whatever emotion you are looking for. They also took it one step further and allowed users to create their own emoticon and publish it to the network. As result, Ameblo has an unlimited supply of user created emoticons. Peta (footprint) Ameblo also integrates the concept of leaving a footprint on a blog that you visited. This is something like poking in Facebook. It is a way to interact with other bloggers on the network and let them know that you visited a blog. Ameba makes footprinting, known as Peta, easy by allowing you to add a footprinting button anywhere within your blog post.
Connecting Blogging to the Real World Recently Ameblo started offering services to connect the real world and the web world. These include the ability to directly
publish your own blogging book and create
business cards with the URL of your blog to pass out at social events.
A Blogging Empire Ameblo offers a plethora of services and interesting features that I can't cover here due to limited time. Hopefully the examples above give you an idea of what is happening with Ameblo and the Japanese blog space. I believe Ameblo is creating a true social media empire that takes blogging to the next level.

What an awesome post.  Learned a lot from reading this.  I heard fragments about these features from friends, but never got it all in one place until now.  I've always wanted to know more about the web scene in Japan and other countries.

I've written a bit about what it's like in the big dragon--China's Internet: A Parallel Universe.

Comment by Scott Murphy on May 21, 2009 at 7:39pm
Same here, it was great meeting you the other day and thanks for reading through my super long blog :)

Comment by Dan Zelikman on May 21, 2009 at 4:52pm
Cheers for the post Scott, super informative. It was also great meeting you the other day, I look forward to working more with you and Dan in the future.