Earlier this year I was conducting a training class on programming and found I needed to provide trainees with some models for evaluating the maturity of a  technological concept, device, or platform. One such model that stuck with me over the years is Gartner Research's Hype Curve Model. If you are not familiar with them, Gartner is a technology research firm composed of independent analysts based around the world. Their Hype Curve Model or "Hype Cycle" illustrates the ebb and flow of "hype" or excitement behind a particular technology as a function of time. This pattern is described in 5 stages: 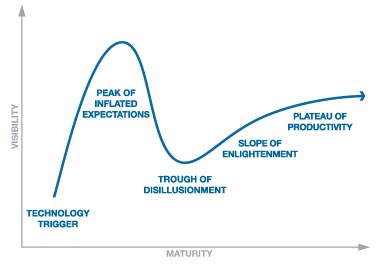 Now depending on your stance, you may wish to get in at different points in the curve. Most people probably want to avoid the crash from the peak of inflated expectations. However, early adopters or those on the cutting edge, may want to get in from ground zero and ride the roller coaster. The most risk-averse may want to dodge the volatility all together and wait for mainstream adoption during the plateau of productivity. Keep in mind also that the whole cycle applies only to technology that actually survives and grows to maturity. Some ideas may fade into oblivion at any point on the curve. Whatever your stance is, I have found that having this model helps to frame the question and serves as a good guide on whether you want to risk your time, money, and energy on a particular technology at a particular point in time.

If you are wondering where on the curve Gartner places certain technologies, here is their 2012 assessment: 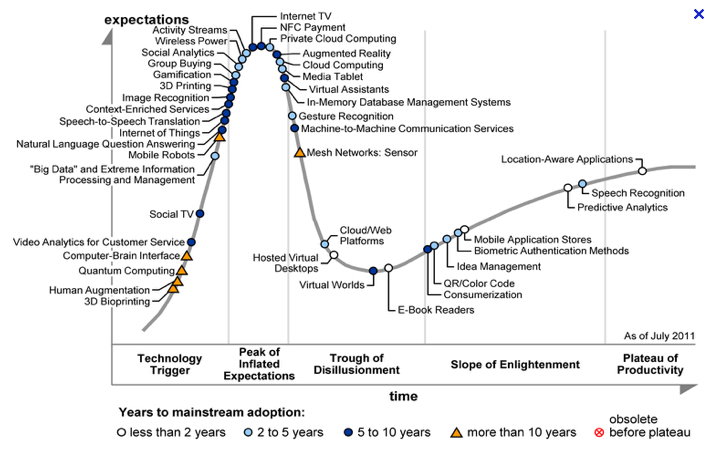