About 15 years ago (I'm terrible with dates) I was working with my old friend
Brent Ridenour on a software project in the Bay Area. During that time Brent lent me a book on
knot theory that reinvented my view of mathematics. I found the whole concept of mathematical knots - the unknot, prime knots, knot polynomials, etc. fascinating. It forced me to revisit some basic skills that I had embarrassingly lost, and learn numerous new concepts. Brent was kind enough to spend time walking his slow friend through the concepts. The most important thing I took away from the experience was the realization that past a certain point, one that I never reached in school, math becomes really, really interesting. The
Wikipedia explanation of knot theory:
Many years later I got a chance to work on a Java Swing knot visualization tool for students. The tool took declarative descriptions of knots and created projections (visualizations.) It supported knot invariants, diffs, Reidemeister moves and various other operations. No other project has caused as many brain sprains, and no other project has created as much satisfaction upon completion. What was your favorite project? 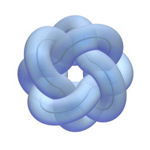 Comment by Kevin Talbot on January 13, 2010 at 1:06pm
I was the project manager for the development of the Philips Sonicare "Intelliclean" electric toothbrush back in 2003-2005. It was a big, hard project with major cultural issues between Philips who bought the Seattle area start-up called Optiva that created the Sonicare toothbrush. Also, Proctor & Gamble was a partner in the development as they created the special toothpaste for the integrated toothpaste dispensing system which brought another batch of cultural issues. The product launch at the American Dental Association in Orlando Florida was an amazing event. We had an outstanding project team that overcame many critical issues along the way and the product was launched on time to rave reviews, but unfortunately it was a commercial failure due in large part to adversarial failure of the Philips/Proctor & Gamble partnership right at the launch plus the high price and limited toothpaste selection for the product. "It was the best of times, it was the worst of times" sums it up well for me.

Comment by Mark Enomoto on January 10, 2010 at 10:16pm
Working on the re-design of the UI for PocketPC 2001. While this pales in comparison to the iPhone and Android's interface, this was a bold move for WindowsCE at the time. We managed to convince management that we needed to gut the Ix model for mobile devices and convince our hardware partners that "aesthetics" were paramount in the mobile space. When the PalmV showed up in our offices it was both disheartening and encouraging in that we had shipping proof that this was the bar we had to achieve. In the end the product had its flaws and ironically I can still see UI that I designed being shipped in Windows Mobile 6.5. The important part for me was being able to design something "better" and ship a real product. When PM, Dev, User Research and Design all work in synch its a "Good Thing" as Martha would say :-)

Comment by Cameron Souza on January 8, 2010 at 11:00am
My favorite project was a multimedia portfolio manager for actors. I learned a dozen new skills including video streaming.

Dan Starr: Do you remember the name of that knot theory book? I'm intrigued by your mention of prime knots, knot polynomials and transformations applied to knots.

I was afraid someone would ask this :-) Its been too long. I don't remember the title, but I'll ask Brent next time we talk. A prime knot, as you might expect, is a knot that cannot be decomposed into two nontrivial knots. Nontrivial just means they aren't simple loops (the unknot.) You can add prime knots by clipping them and joining the ends. This creates a composite knot.

Dan Starr: I like stumbling on to instructive tutorials about math topics which are palatable to students or people with basic math knowledge. Webpages like these were nonexistent when I was young and I think could be really useful for teachers to foster more curiosity in students.

We were just having a conversation about this in the office. If someone had shown me basic knot theory in say, junior high, I would have spent a lot more time on math at a young age. I took a look at some high school math books at a friend's house the other day and they seem very much as I remember them - unnecessarily boring. Topology fields that are easy to visualize seem like a great way of getting young minds excited about math while driving home the essential point that math is about more than pushing numbers around. We leave the explanation of its abstractness, power and beauty until far too late in the educational process.

Dan Starr: Somewhat related: I'm a big proponent of open sourcing US educational plans and material - it can only improve things.

I agree. I think the availability of free, high quality educational material is a good metric for the sophistication of a society. Everyone benefits in manifold ways.

Comment by Dan Starr on January 1, 2010 at 10:19am
Do you remember the name of that knot theory book? I'm intrigued by your mention of prime knots, knot polynomials and transformations applied to knots.

I find learning unfamiliar math concepts builds a deeper understanding in a surprising number of other fields and makes subsequent learning more enjoyable. Coming from a physics and thus continuous math background, discrete mathematics and lambda calculus are new and novel to me - probably a big reason why I enjoy programming so much right now.

I like stumbling on to instructive tutorials about math topics which are palatable to students or people with basic math knowledge. Webpages like these were nonexistent when I was young and I think could be really useful for teachers to foster more curiosity in students. Somewhat related: I'm a big proponent of open sourcing US educational plans and material - it can only improve things.

One such tutorial is this page on Fourier Transforms:

Thinking about the general concept of transforms is fun, whether fourier, wavelet, bessel functions, etc... As well as the fact that they can be viewed through linear algebra, eigenvectors and eigenvalues.