The desk I was assigned to was in the corner with a window overlooking a major street and I could see down it all the way to Shimbashi station. The salaray-man district of Tokyo. It was Friday, March 11, 2011 at around 2:45pm and a beautiful day.

I always took off the cover to drink, especially for really hot coffee. The plastic seemed in the way.

A large earthquake started. It felt like one of those rolling types. The liquid was swishing back and forth. Everyone looked up, because it seemed larger than usual. The liquid started to splash, so I had to cover it.

One by one, we all realized it wasn't going to stop. The building was swaying, our copy machine started rolling into the aisle, and then people either ducked under their desks or ran toward the exit.

I grabbed the person next to me and headed for the door. Scenes of 9/11 and the building collapsing flashed in my head.

And then it eased and stopped.

Earthquakes are common in Japan. When I first got there I would run under doorways and freak out, but after a few months in the country you got used to them. Nobody would panic. I don't think anybody really cared. Until that day. 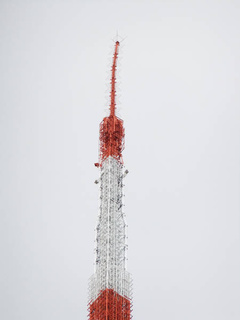 It was only a 5.0 in Tokyo, but the largest we've ever experienced. It bent the top of the Tokyo tower...

For whatever reason we didn't leave the office. We got up, stared at each other, and then some even got back to work.

I wanted to leave the building.

And then an aftershock hit. The book cases that we stacked in the meeting area came crashing down, almost hitting the managers and president of the company, and breaking the meeting table.

Finally, we decided to leave and head to an evacuation zone, which was Hibiya park down the street from us.

After we get there one of the managers asks me, "did you shut down the servers?". I answered no. "We should go back and then shut them down, and gather our belongings". Scenes of 9/11 flash in my mind again.

I tried calling my wife, no signal.

We all head back up using the stairs. Everyone's phones were dead, but the office's Internet was still working. Twitter was going off especially about a tsunami. Someone posted a link to a live stream of the tsunami on Al-Jazeera's website. We watched in horror...

Phone system was down, but the Internet was working. Facebook and Twitter became our main means of communication. A lot of good advice from Twitter users that were based in Tokyo, like use Google Maps to figure out your walk home and make sure to print it out. And tips on how to save your iPhone's battery life.

I tweeted out a message about going home.

The train system stopped. Traffic was at a standstill. Bicycles were sold out. Convenience stores emptied. Millions of Tokyoites started to walk home. It felt like the biggest concert ever just ended.

And then a reply. My wife! I was so relieved...

Luckily I downloaded the app and setup an account for her a couple of weeks prior. And showed her how to get the news.

She didn't want to tweet. She wasn't even on Facebook and refused to get on. I'm glad that she replied.

Every time I passed a major train station I would tweet it out. It was comforting knowing that she got my pings. And it was nice getting encouragement from friends telling me Gambare!

Yes, scary. Unfortunately people from Fukushima and Tohoku are still affected... But it's amazing how much of the Tohoku region has been restored.

Amazing and scary. So glad you and Shirley were OK that day and my thoughts go out to those still coping with the aftereffects of the disaster.