My experiences with them were mostly at where ever I could find them. From liquor shops, bowling alleys, pizza parlors to if I was lucky -- at a game center. I would spend half my day there... ok, the whole day. I was addicted.

I started up again during my time in Tokyo. At first since the games have changed so much I was hesitant to play. And the kids (and adults) jamming away at Taiko no Tatsujin or competing with each other in Gundam pods were a little intimidating. After overcoming my anxiety, which took a long 5 minutes, I jumped in and fell in love with them again. 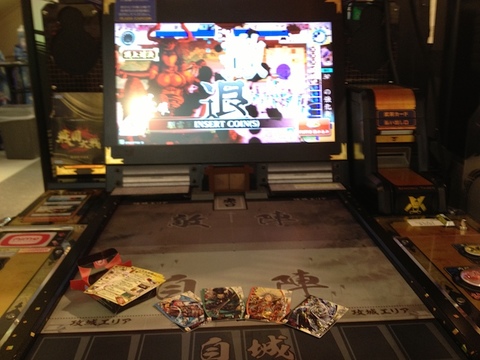 The ones I enjoy playing the most are the hybrid coin operated card games, where you place physical cards on the machine's game grid and use them as controllers. When you place a card on the surface of the grid it'll register and position it within the game. Depending on the game, each card would represent something different like a mythical fantasy creature, soccer athlete, Gundam pilot and mobile suit, or a powerful war lord with an army of spearmen.

There are card dispensers next to the game where you can buy your starter pack. In most cases the pack comes with a IC card that is used to save your progression/stats and includes a set of cards. Like in physical collector card games each one has a rarity level from common cards to shinny ones, which can be found traded within Japanese auction sites. At the end of each game, the machine will spit out a new card or two.

The games are networked not only within the game center, but across multiple game centers. And for some games there's a giant screen that everyone uses to see the stats of an ongoing match for a shared experience. You can choose to play solo against the computer, one on one with another person, or join a multiplayer game.

On my recent trips to Tokyo while my wife goes shopping I would visit a geesen (ゲーセン), slang for game center in Japanese. And escape into an alternate world. And become a kid again.

@Douglas - I think part of the appeal is the large displays. Its hard to fit a giant TV in a tiny Tokyo apartment. Also, most Japanese apartments and even houses provide very little privacy. Sometimes its nice to escape from the other folks who live in your house, especially when you are a teenager :-)

I like the idea of using the phone for virtual items that interact with the arcade game, and maybe even a controller to drive the giant arcade displays.

The first arcade that I saw using cards was Mushiking (http://mushiking.com/).  They used to have them in a game center in Ala Moana.  I don't think it caught on in the U.S., but in Japan it was popular.

I wonder if they have something like this for mobile phones where you can buy a scanner and cards and play games over the internet, or perhaps better, NFC/RFID cards that will work with any NFC enabled device.

It is interesting that in Japan game centers still exist while in the U.S. they are all but gone. $3 a game is pretty steep when you can get mobile apps for free or usually cheaper.

Nice! Yea, you need the cards. They're not too expensive, around $7 for a starter pack. Each game costs $3 though. So it does add up. At least you get a card after you're done.

I wonder if there's a one here... Hidden in an obscure game center

The Gameworks at Seattle has one of those Japanese card games described. Never figured out how to play them... getting cards would have helped but I never made the connection that these were purchased separately -- figured that some component of the game was missing/stolen so the game was inoperable. Seattle's Gameworks also has Robotron!