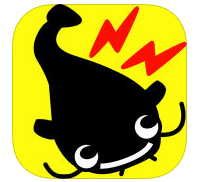 About 15 seconds into this video you'll hear an alarm from an iOS app called Yurekuru, which is a Japanese word that translates to a shake or sway is coming.

The alarm and a push notification would warn you of an earthquake. And depending on your location, how long until you'll feel it and estimated intensity.

The app receives warnings called Earthquake Early Warning (EEW) issued by the Japan Meteorological Agency. According to Wikipedia, there were over 1,000 seismometers in Japan at that time.

Actually most phones made in Japan at that time had this capability due to regulations that made it mandatory for 3G phones since 2007. Apple iPhone's didn't have this capability and thus an iOS app was made available.

We had over 1,000 earthquakes in March. It was unnerving when you were on a train and somebody's phone started to make this noise. After a few seconds almost everyone's phone was going making it. A 'ring, ring' here and then behind you. Next to you. And then your phone.

I would quickly look to figure out when and how big it was going to be. And then you would brace yourself. The car would become silent and you could feel the anticipation from around you. I would wonder is this going to be the big one that everyone talks about and we were over due for.

Since there were so many earthquakes, many got fatigued from so many alerts. I set my alarm threshold higher so that I wouldn't receive alerts for smaller earthquakes. I think it was set to 3 or 4.

Here's a visualization of the earthquakes that occurred in 2011. It gets intense in March...

I haven't heard the Yurekuru alarm sound in a while. Even though it's only a YouTube video, hearing it again gives me goose bumps.

Yikes, I'm glad I was only on the 6th floor. I heard stories about how the buildings swayed for a good 20 minutes after the initial one. And the middle sways the most.

I wasn't in Japan on 3/11 but I do occasionally get that alarm on my phone and it scares me everytime.  A bunch of my friends were in a building at a time and they said that it swayed so hard that they couldn't stand up.  They were basically on the floor trying to grab onto something.  Imagine that....very scary.