Nearly 2 years ago I blogged about my experiences using Windows Phone for 6 months. I’m back to update my impression of Windows Phone as a whole and also blog about Windows 10 for phones.  Windows Phone has gone through several updates and in early February 2015 Microsoft released the first Tech Preview for Windows 10 on phones.

Two years ago Windows Phone’s UI was made up of a flat tile design.  It still has that same design, but added more tile sizes, the ability to add a background and in a recent update, folders.  The UI is still fluid and fast although on older devices it starts to stutter sometimes.

Live Tiles are still around and work about the same as before.  Instead of the 3 sizes from 2 years ago tiles can be made very small, small, medium and large. Tiles can also be placed in a Live Folder and you can see tiny live tiles in that folder.

Kid’s Corner was a differentiating feature for Windows Phone 8 2 years ago and it’s still around, but hasn’t been updated. It still allows the user to set specific apps to a separate home screen so that people using your phone don’t have full access to all of your phone’s features and apps.  I still find it useful, however Microsoft later added a similar feature called App Corner which does nearly the same thing.  Although it works okay I don’t know why there is a Kid’s Corner and an App Corner now.

Windows Phone has a concept of a lens.  When using the camera app you can open up a selection of lenses which are other apps that the camera can hook into. Over two years companies have created additional lenses that add functionality to the basic camera app.

When Windows Phone 8 first came out People Hub was one of the talking points.  It was supposed to make Windows Phone personal and make it easier for users to get to their contact fast.  From People Hub a user could get to a contact and then interact with them directly via phone, email, Facebook, Twitter without opening separate apps. Unfortunately People Hub has gone away.  Hubs in general have been deprecated and Windows Phone seems to be moving away from the integration it first started with.

Windows Phone 8 started off without any notification center.  Users were expected to rely on the Live Tiles that show updates about emails, posts and other app happenings.  Over the last 2 years Microsoft introduced a notification center that follows how most other mobile OSes manage notifications.

Cortana is a virtual assistant for Windows Phone. Like other virtual assistants you can speak to Cortana and it will speak back with answers.  Cortana will also suggest news and events, show you the weather, alert you to traffic conditions and do many of the types of things you would expect from a virtual assistant. I think it has been a nice addition to Windows Phone and look forward to further integration.  It seems like Microsoft is interested in making Cortana sort of a hub between users and their data.  It is even coming to Windows 10 on desktops.

Two years ago Windows Phone had 145,000 apps in the store.  Today they have 300,000. The number of apps continues to be a sticking point for users considering Windows Phone. From my personal use I have seen the app situation improve quite a lot.  From having very little choice in the beginning to being a solid 3rd app ecosystem after iOS and Android it has been interesting to see how the Windows App store grows. One thing that I enjoyed is the introduction of universal apps in the Windows Store.  These apps are available for both Windows Phone and Windows 8.  I always look for apps that are usable on both Windows 8 and Windows Phone. Windows 10 promises to bring more app unification for both consumers and developers. 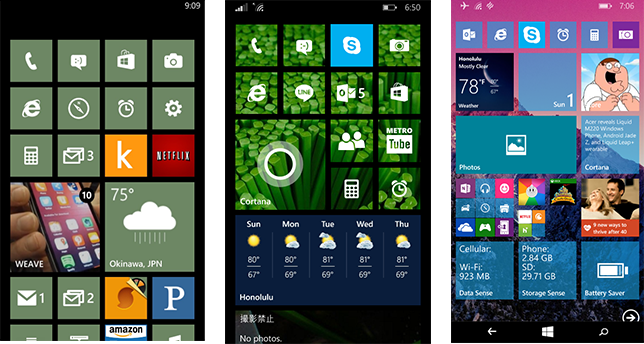 In addition the toasts in Windows 10 are planned to be actionable and individual notifications can be dismissed.  In Windows Phone 8 all notifications under a group had to be cleared at the same time and toasts could only be dismissed or linked to open the notifying app.

In Windows 10 the system options are organized into separate categories instead of displayed in a large list. That is about it for the first technical preview.  I'm sure there have been many changes under the hood.  There are many other small UI updates and inconsistancies, but since this is a tech preview the UI is most likely going to change before final release.

One trend that people have been noticing about Windows 10 for phones is that Microsoft is moving away from the their typography heavy UI and moving more toward how UI in Android and iOS is done. Perhaps this is to make Windows UI more mainstream so that users coming from other platforms feel more comfortable with the UI and developers don’t feel that they need  to redo their entire UI in order to bring their apps to Windows.

It will be interesting to see how Windows 10 for phones changes over the next few months.  As a user I’m looking forward to Windows 10 and I plan to stick with a Windows Phone for now.  As a developer we are going to see a lot come out at BUILD this year.  I’m hopeful that Microsoft will be able to improve the APIs and tools so developers can build more powerful apps that work across all Windows 10 devices from phones to tablets, laptops, desktops and XBox.