My Experiences with Windows Phone 8

Last winter I bought a Lumia 920 which runs Windows Phone 8.  Windows Phone 8 is a large overhaul of Windows Phone 7 because now it uses the same kernel as Windows 8.  It also added support for better hardware and a more flexible development framework. Previously I have used the original iPhone, the iPhone 4 and the Galaxy Nexus Google Android phone. I have never seen anyone with a Windows Phone and I thought it looked neat so I decided to try it out.  Here are my experiences and opinions about Windows Phone 8 over the last 6 months. 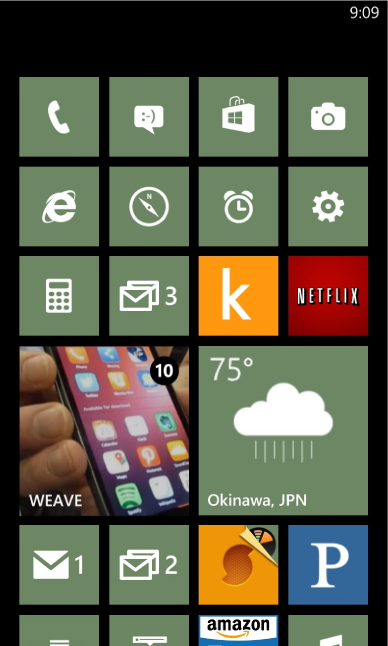 The first thing anyone will notice about Windows Phone 8 is it’s different user interface.  Instead of icons it uses a flat tile design.  Instead of swiping left and right to view more apps you swipe up and down a continuous wall of tiles.  To view all your apps you swipe left to a full listing of apps ordered alphabetically and searchable.  The UI is fluid and fast.  I’ve never encountered a case where scrolling or swiping resulted in stuttering animations and everything feels very responsive.  I haven't experienced any crashing or freezing.

My opinion: It does what it needs to do and I haven’t had any problems with it.  The small animations make the UI feel fluid and fast and it’s fun to use.

Windows Phone uses a concept called Live Tiles.  Tiles have replaced the icons you would normally use to launch apps.  Tiles can be 3 sizes: small, medium and large.  The small tile can show the least information and usually shows a number indicating unread counts or notifications.  The medium tile is the size of 4 small tiles and can show more information.  The large tile is the size of 2 medium tiles and can display the most information.

My opinion: The tiles are a cross between icons and widgets.  Being able to resize them and move them around the screen helps to keep things fresh.  When I look at my phone’s start screen I can immediately see recently taken photos, recent Twitter or Facebook posts, email counts and my next calendar event without opening an app.

Kid’s Corner allows you to set up a section of your phone with select apps.  Using this you can restrict a user from using and seeing apps that you do not want to be seen.  For example you can exclude your email and calendar tiles from Kid’s Corner so that the person using your phone can’t read your emails.  Obviously it was named with the parents of kids in mind.

My opinion: It could use improvements.  I think Kid’s Corner is great for people who have kids and end up letting their kids play with their phones.  It’s also a convenient way to let someone borrow your phone for a short time without giving them full access to everything.  It can use some improvement because although you can choose which apps go into Kid’s Corner the apps themselves are not restricted.  For example if you add the camera app to Kid’s Corner the user can open that app and then see all your photos.  The only thing that might be better than Kid’s Corner is true multi-user logins, but is that something we really need on a phone at this point? Kid's Corner might be just enough for now.

Windows Phone 8 has a concept of a lens.  When you use the camera app there is a button that opens up a menu of lenses.  Lenses are other apps that the camera can hook into.  There are all kinds of different lenses that give you the ability to take panoramas, photosynths and apply filters.

My opinion: It’s a nice feature because you can get to these lenses through the camera app instead of opening them separately.  The usefulness depends on what types of apps choose to hook into the camera lens feature.

People Hub is the main contact management in Windows Phone 8.  It attempts to aggregate contacts from your various accounts.  If you set up email, Facebook, Twitter or LinkedIn it will put them all together.  You can filter your contacts to not show certain accounts.  You can also link contacts across accounts to help manage cases where the same contact resides in several contact lists.  A contact can be pinned to your start screen and then you can see that contact’s recent posts and information.

My opinion: It does a nice job of consolidating contacts across accounts and it’s nice to be able to pin a contact to the start page and see meaningful information about that contact as well as gain quick access to email, phone, text or even post to that contact’s Facebook wall.

Windows Phone 8 has no notification center.  Instead users must rely on the Live Tile notifications.  Toasts appear at the top of the screen when a notification comes in, but once it disappears it is gone forever.

My opinion: I think they should create a proper notification center.  If you don’t pin an app’s tile to your start page there’s no way to see notifications for that app.

At the time of this blog post Windows Phone has around 145,000 apps.  Compared with iOS and Android it’s a small number.  No one is going to need 145,000 apps, but the other issues Windows Phone faces is that new apps aren’t released for it as fast and they aren’t updated as regularly.  It’s also arguable that apps for Windows Phone are still of lesser quality than apps in the more mature Apple App Store and Google Play.  Windows Phone is still missing some prominent apps like Instagram.  Even Facebook and YouTube are published by Microsoft as opposed to by their respective first parties.

Microsoft is trying to improve the app situation by offering developers free tools and at the writing of this blog post they are offering $100 for every eligible new app accepted to the store (up to 10 Windows Phone apps per developer).

My opinion: The number of apps and developer enthusiasm for the platform will probably depend on Window Phone’s market share.  As a consumer it might be difficult to stick with Windows Phone when the iOS and Android always get the latest apps and games.

My experience with Windows Phone has been positive so far.  As an OS it has not let me down.  The lack of apps is probably the biggest downside, but it has been fun being part of a growing ecosystem where every new app is big news.  As a developer I’m interested in developing for Windows Phone 8 and I’m excited about the changes Microsoft has made to the core of Windows Phone that may eventually lead to a unification or better cross platform compatibility between Windows and Windows Phone.  I have no idea if Windows Phone will ever gain significant market share, but I feel it has enough potential to grab a solid 3rd place position and I’m glad I was able to try it out.

Great post! For somebody who's never used a smartphone that's not an iPhone, these sorts of posts are really helpful.

The big question for me is whether or not Windows Phone is worth developing for. Obviously, its market share is much smaller than the iPhone and Android juggernauts, so the amount of users that will purchase a product is more limited. But without a zillion other apps on the store, perhaps that means there's more opportunity to reach your target audience without being drowned out by 20 other apps that do the same thing?