The Future of MIC is at Stake: Testify Today

Posted on behalf of HTDC 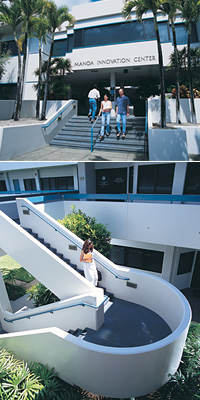 The House Committee on Higher Education (HED) has scheduled a hearing for the MIC Land lease bill HB71 on Tuesday, February 5th at 2:00 PM.  This bill is important because HB71 will allow HTDC to continue operation of MIC as an innovation center. MIC is built and operated by HTDC but it happens to be on UH lands. HB71 requires UH to extend the current MIC land lease for no less than 25 years. This is more than a land lease issue for HTDC because we rely on the revenue from rent to fund our program.

Otherwise, the lease expires in April 2015 and HTDC will be forced to relocate AND find an alternate source of funding and/or reduce our program.  The land and the building will return to UH.

HTDC's position is that we are in SUPPORT of the proposed bill.  At the same time, we cannot afford to depend on this and we continue to look for another suitable facility and source of funds.

Regardless of your opinion on the land lease, we encourage all friends of HTDC to submit testimony stating your position for this bill and also comments in support for the HTDC program to ensure that HTDC and the Manoa Innovation Center incubation program has a future beyond 2015.

The link to the bill status and description can be found here: HB71

Attached is HTDC’s testimony for your reference.

2.      Click the SUBMITTESTIMONY button found on the upper right hand corner on HB71

3.      Complete the online form for testimony submission, and upload your written testimony.

4.      Forward HTDC a copy of yourwritten testimony upon submission to: testimony@htdc.org

Aloha and Mahalo on behalf of the entire staff at HTDC,

Thank you Sandi. We just added your template link to the post above so nobody misses it. Good luck!

Thank you Daniel! The link to download the testimony template can be found HERE. You may also download a copy of HTDC's testimony for reference.  Mahalo everyone for your support!

We fully support HB71. I submitted testimony this morning and I will be in attendance at the hearing.