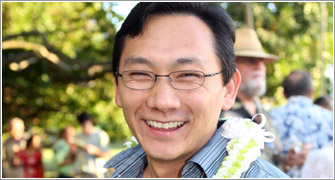 Darren T. Kimura is an energy geek. While still in college he founded his first-energy related business, a consultancy focused on helping businesses conserve power and save money. He launched that business out of a the back of a beat-up Chevy Blazer. Today, Kimura is a top executive of two of Hawaii's most prominent energy companies,
Energy Industries and
Sopogy. Energy Industries is a leading player in energy conservation planning, consulting and systems integration with offices on all major islands and on the West Coast. Kimura is the Chairman of the Board of Directors and founder. Sopogy, among Hawaii's most prominent venture-backed companies, makes innovative compact solar energy systems that use smart design and cheap materials to capture the heat of the Sun and convert it to electricity, power air conditioning units, or provide hot water and process heat. Kimura is the CEO, CHB, President and also the founder of Sopogy.

Sopogy is on the cutting edge of the fast growing concentrated solar power segment, a group focused on converting thermal energy to power rather than photons directly into electrons. We decided to name Darren our Featured Techie for a number of reasons. Sopogy is about to light up the first large-scale installation of its technology on Dec. 10 at Keahole Point on the Big Island, a notable first for Hawaii and for the world. Sopogy is rolling out a number of nifty new products, as well. And the company is Hawaii's best hope for a technology IPO in the near future.
The Keahole Point project is called Holaniku and it will produce 500 kilowatts of energy using 1,000 of Sopogy's patented
SopoNova solar collectors. The project will harvest roughly 2 megawatts of thermal energy and could be ramped up to 750 kilowatts of power generation fairly easily. Sopogy, in general, is emphasizing thermal capture because this can be useful for double and triple threat installations that not only deliver power but also solar air conditioning or process heat. Even the 500 kilowatts coming online are enough to power roughly 100 homes in Hawaii. Holaniku will feed power directly into the HELCO grid and it will be the largest solar energy installation in the Hawaiian Islands to date. Set in the relatively empty lava fields of the Kona side, Holaniku could easily be expanded. "The vision is we could possibly build as much as 30 megawatts of power generation out there," says Kimura. Why Hawaii to date has not had a major solar energy project is beyond me but kudos to Darren for making it happen. With a degree in electrical engineering, Kimura himself played a key role in the design of the SopoNOVA systems and he is named on the company's various patent applications (pretty good geek cred, no?).

Holaniku is not just the first major solar installation in Hawaii. Holaniku is also the first installation in the world that uses small modular solar thermal power units -- MicroCSP, as Sopogy calls them. For the most part, solar thermal energy plants have been designed as massive fields of mirrors all coordinated to concentrate beams of heat on central towers where water or other organic liquids are boiled to turn turbines. Sopogy's SopoNOVA units are self-contained and do not require a large central tower or other centralized electrical generation facilities.
This configuration has a number of benefits. First, power generation can start within a matter of months and grow continually as more collectors are brought online during the course of a project. This is very different than most solar power projects which spend years in construction before producing any power. The ability to build staggered power production increments can be an enormous tax benefit and can also help secure project financing because time to cash flow for power generated is far shorter than with standard projects.
Second, MicrosCSP does not require the same economies of scale to make financial sense. Buying a massive Siemens turbine for a monolithic solar thermal power project is a huge gating factor for getting any project off the ground. Sopogy requires no such huge investments. Its technology is therefore far more friendly to industrial and commercial installations that generally run on a smaller scale. Not coincidentally, these smaller installations are much easier to get permitted due to their location on already disturbed property, the lack of requirement for a tall tower, and the proximity to existing transmission infrastructure. In fact, putting a large number of these installations in an area such as Kakaako or Mapunpuna on building and garage rooftops could contribute significant amounts of incremental power to to Oahu.
Third, MicroCSP does not require water to cool off the generation system. Sopogy uses organic liquids (one might be anti-freeze) in a closed-loop process that results in evaporation of the liquid followed by condensation. The huge large-scale solar thermal projects being slated for deserts in the West have massive water requirements that could become more contentions as water supplies grow tight. And in Hawaii, where water is also an increasingly precious natural resource, solar power that does not require water for cooling is a big plus.
SopoNova is only one of Sopogy's products. Kimura and his team have also developed SopoFlare, the first roof-top thermal collection system designed for either residential or light commercial use. This is a huge untapped market both in Hawaii and on the Mainland. And last week Kimura rolled out
SopoLite, a pint-sized solar thermal energy collection unit that weighs roughly 90 pounds and can provide 2 kilowatts of power or mobile water desalination capability. The unit can be trailer mounted and towed behind vehicles going into war or disaster zones. Naturally, the U.S. Department of Defense and FEMA are expected to be among the first customers.

To his credit, Kimura has steered Sopogy through A and B rounds of venture financing. He is halfway through raising a C round that will tally in the mid-eight figures, among the largest capital raises ever for a Hawaii technology company. His goal is an IPO. It would be the first since Hoku Scientific went public and one of a tiny number among Hawaii-launched companies should Kimura pull it off. Anyone who knows how hard Darren works wouldn't bet against him. Keep your eyes open for Sopogy appearances at public events. I've heard the SopoSmores are quite tasty (solar collectors aren't only for power, you know). You might just ask for a bite and end up with a rooftop unit.

Comment by Peter Kay on December 4, 2009 at 5:18pm
It's been so fun and rewarding to watch Darren take Sopogy from concept to where it is now. It's even more fun to cheer him on as he marches towards the holy grail of Entrepreneuring: the IPO.

Comment by Russ Ogi on December 2, 2009 at 7:17pm
Congratulations on the recognition Darren.

Comment by Daniel Leuck on December 1, 2009 at 6:04pm
Great post Alex. My fingers are crossed for a successful Sopogy IPO! We could really use some good news...