Nov 4: A Historic Day for Tech

Today will be remembered as a historic day for technology as well as politics. CNN became the first station to introduce a pseudo-hologram technology to make it appear as if two correspondents separated by thousands of miles are standing in the same room. The technology works by having an animated avatar superimposed on the video stream by correlating the angle of the camera being viewed by the audience with an array of cameras positioned around the subject being "beamed". I thought it was a little misleading for CNN to call it the first hologram on TV since there was no 3D projection involved (i.e. Wolf Blitzer couldn't see a 3D image standing in front of him), but it still ranks pretty high on the cool-o-meter. I can see how this would be less distracting than a split screen in many situations, especially when used for more than two participants. 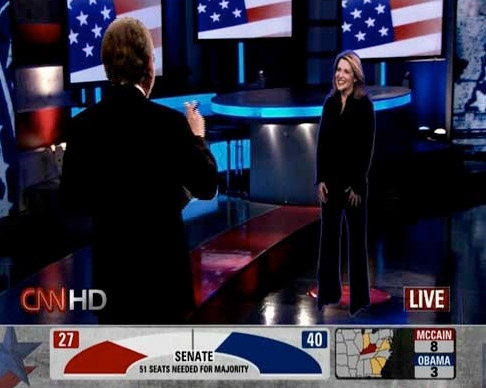 In other news, Google and friends won a long running battle with the telecom giants and sports leagues to open up the white spaces spectrum. Today's move by the FCC to release this spectrum freed up by the move to digital television could be the beginning of truly ubiquitous wireless broadband. Yeah!

Comment by Viil on November 5, 2008 at 10:33pm
No, I worked at the foreign news department while these guys worked at the graphics department creating special effects for our news stories. They always had the coolest toys :)

The technology used for the CNN "hologram" was provided by Vizrt, which was founded by some of my old colleagues from TV2 Norway.

Cool! Did you do work in that area?

The technology used for the CNN "hologram" was provided by Vizrt, which was founded by some of my old colleagues from TV2 Norway. It's a small world...

Comment by Cameron Souza on November 5, 2008 at 7:13am
CNN's mobile site displayed a Java stack trace for half the day.

Thank you :-) I clearly had one too many coffees.

Comment by Johnson C. Ho on November 5, 2008 at 6:23am
When I saw Hologram the first time last night on CNN, I thought I was watching Star War :-)
It's indeed pretty cool technology. I'm still impressed by the touch screen used by John King.

Congratulations to Obama! I waited 90 mins to vote last evening and it was well worth it being part of this historical election!

Comment by aaron kagawa on November 4, 2008 at 10:38pm
yea, i thought the pseudo-hologram technology was awesome. it was really cool to see. here is a video of the technology.

in general the election coverage has been pretty good. CNN did a good job and even our local news (i happen to like to watch KGMB 9) did good too.

Comment by Daniel Leuck on November 4, 2008 at 6:55pm
Congratulations to Barack Obama, the next President of the United States. As a social liberal and fiscal conservative I inevitably struggled with elections in our two party system. I have always been a big fan of John McCain, a man of great integrity that has served our country with distinction for half a century. That being said, I think this was the best pair of choices we have had in my lifetime. Obama has the potential to be a great president. Although he is young and relatively inexperienced, so was Abraham Lincoln, the greatest president to serve our country. I hope the first presidential candidate to really understand our webified generation will lead our country with integrity and thoughtfulness on issues ranging from technology to the economy.