In late 2008 Google posted the results of a comprehensive study by the Radicati Group regarding the reliability of Exchange, Lotus Notes, GroupWise and Gmail. They found that while Gmail averaged less than 15 minutes of downtime per month (almost all of which came from one outage in August of 2008), companies using on-premise email solutions such as Exchange "...averaged from 30 to 60 minutes of unscheduled downtime and an additional 36 to 90 minutes of planned downtime per month." Exchange was the worst offender of the lot: 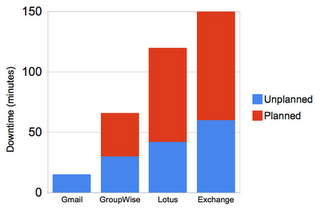 Some local businesses and schools have already made the transition. We had a great panel discussion today with Punahou CTO Wendi Kamiya, who lead their migration from a legacy system to Google Apps. She had nothing but good things to say about the move. Governments in other parts of the country are also making the jump. Los Angeles was the most recent large city to move to Google. LA's CIO Randi Levin put it simply, "Their security is better than ours...cloud computing is safe." The cities short term savings is predicted to be $13.8M. Think what we could save. Maybe we could even get our children back in school on Fridays...

Comment by Mika Leuck on February 26, 2010 at 6:54pm
Scott - Thank you for doing so much hard work to improve our schools and help keep Hawaii techies employed!

Comment by R. Scott Belford on February 26, 2010 at 6:30pm
Aloha. To be be clear, the offer from Google for the DOE to adopt Google Apps for Education not only for students, but also to replace our Lotus Notes infrastructure, has been before our DOE since May of 2009. It was my outreach to friends at Google, in response to a parent concerned about FERPA compliance at a DOE school using Google Apps, that had Vice-Superintendent Moriyama considering an adoption. By June of 2009 I was working with the Google Apps for Education Team, who do not make this offer to just any state. However, I had relationships, and HOSEF had the history of integrating advanced technologies into the DOE. I provided an executive strategy to Google that included approaching the DOE, David at UH, and Bully with the Charter Schools.

This is where things get tragic and where Google has let us down. Period. The official agreement for the DOE to adopt Google Apps for Education supposedly went to the AG's office. I worked with the Governor's office to determine that this was not the case. I learned that the DOE was still reviewing it. Meanwhile the Google Apps rep. went on a Summer safari, our DOE changed Vice-Superintendents, and the first offer to close the deal was gone.

I re-engaged the Google Apps representative again in late 2009. He informed me, as if it was news to me, that we had changed Vice-Superintendents. I encouraged him to call the people in the DOE he never called before but who expected to hear from him. I then suggested that he try to focus on Bully and the Charter Schools since they can be more nimble. Besides, the cost for a Charter School teacher to get a Lotus Notes account from the DOE in hundreds of dollars, so there is a real need.

To date the Charter Schools Admin office is considering the official offer, but it is up to early adopters to move forward. I met with David Wu, the new Vice-Superintendent of the DOE, who was considering the offer but wanted to hear from Google. No one from Google is actively selling the DOE or Charter Schools. It is me against Apple and Microsoft.

In order to add pressure to the DOE, I alerted our Legislature and the BOE to the opportunity at hand. This was captured best in an essay that got me hired at the Legislature entitled Saving the DOE, http://links.belford.net/savingthedoe. I followed this up by exposing the following procurement abuses that take away the jobs people here in this Tech Hui could use. Those essays were entitled Paying to Watch Videos, Failing to Leverage Buying Power, Saying Yes to Changes, Compromised by Procurement, and No Strategic Direction.

The essays were followed by making arrangements with key Senate and House leaders who were interested in pushing UH and the DOE, but who wanted to hear from Google. Some Senate leaders offered to advocate and legislate. Our Google Apps for Education contact called no one. I even learned from David Lassner that UH's initiative was his own and not because anyone from the Google Apps team engaged him.

Over the last few weeks I escalated my issues with the inability of the Google Apps for Education Team to approach and close the DOE to higher Google authorities. Time will tell what happens next. Getting the State to adopt Google Apps is a two-year old endeavor for me, and pitching them on buying Hawaiian Telcom is a one year initiative that is now superseded by their new broadband offer. I would suggest that having the State adopt Apps is far more complicated than many might realize. Google is not capable of closing Hawaii, and the RFI for their Gigabit offer needs to be more strategic than pleading because we are heavy users.

Comment by Daniel Leuck on February 26, 2010 at 2:37pm
Cost savings and efficiency are obviously the primary reasons for the state to switch, but there is another good one: Having the first state to switch to Google apps would be a major strategic win for Google. This could bump us up the list for the Gigabit broadband initiative and possibly persuade them to expand it by the 800K connections necessary to cover our state (currently they limit a "community" to 500K.)

Comment by Daniel Leuck on February 17, 2010 at 3:14pm
Hey Russell - Understood. I was referring to comments by Paul and Cliff about outsourcing.

I really talking about the CTO and centralization, not using Google. It seems to me that would be the call of a CTO or CIO.

Paul Graydon: Read this the other day that highlights one of the potential dangers of centralising IT, or at least outsourcing. I struggle with the idea of outsourcing. The potential benefits are definitely there, but all too often it's implemented badly and the companies that IT infrastructure is outsourced to don't seem to have the skills appropriate to the role, nor are prepared to go the extra mile unlike an internal IT team.

Just to be clear, we aren't really talking about outsourcing. I've done plenty of outsourcing, and I'm happy to talk about it, but this is really just using Google's SaaS offerings for email, calendaring and, in some cases docs. The administration of the Google app domain(s) could be handled internally by an IT group under the state CTO. Its probably a good idea to hire a company with experience migrating to Google Apps for the rollout, but I don't think this necessitates ongoing outsourcing.


Paul Graydon: If we centralise Hawaii's IT infrastructure we're again taking a gamble about the kinds of IT staff employed.

Sure, but you can say this about any IT strategy - "If we hire bad people the project will go poorly." This all comes down to hiring a good CTO. The best way to ensure this happens is by using a panel of state and commercial IT experts to recommend and vet candidates.
We should also keep in mind that Google Apps isn't some bleeding edge experiment. Its used today by millions of people and thousands of organizations including schools, government entities and multinational corporations.

Comment by Russell Castagnaro on February 17, 2010 at 12:01pm
JW Guillaume: Does this mean it might be a good idea in some areas of government, but a really good idea for the DOE?

I was talking about the type of technology and application, not a specific department, agency or branch. :)

Its all about Core Competency, without that, as Paul mentions, centralization is a total nightmare.

Comment by Paul Graydon on February 17, 2010 at 8:38am
http://www2.timesdispatch.com/rtd/news/columnists_news/article/JEFF...

Read this the other day that highlights one of the potential dangers of centralising IT, or at least outsourcing.

I struggle with the idea of outsourcing. The potential benefits are definitely there, but all too often it's implemented badly and the companies that IT infrastructure is outsourced to don't seem to have the skills appropriate to the role, nor are prepared to go the extra mile unlike an internal IT team.

If we centralise Hawaii's IT infrastructure we're again taking a gamble about the kinds of IT staff employed, and what good (or bad) practices might be implemented. If it's on a per department basis the impact of bad IT staff can be minimised, but at additional overall cost to tax payers and at the risk of developing more and more disparate systems and infrastructure that is increasingly harder to interconnect. With any luck a centralised system would see a reduction in bureaucracy with easier data exchange between departments.

My gut feeling is the potential benefits of a centralised IT infrastructure would probably work out better, but it would take a fair while to see any of the benefits given how much momentum is currently in place in the current split format.


Does this mean it might be a good idea in some areas of government, but a really good idea for the DOE?

Comment by Daniel Leuck on February 16, 2010 at 11:04am
Hi Ken - We will be there. I think Cliff was suggesting something structured that would require some organizing, getting the right contacts in various departments, etc., but we are also happy to have a casual conversation.

Russell Castagnaro: I mean no internet access allowed at all, not just sometimes. They can only access the NGN. No public email either. Nada. Gears wouldn't help.

If they have no internet access at all then I guess we don't need to worry about improving the way they handle email or document sharing ;-) Obviously there are thousands of government workers who do have access, so I think we can limit the conversation to them.


Russell Castagnaro: Plenty of others have already said that legislating a specific technology is a bad idea, and I agree. I will talk about the state CIO/CTO positions that are being discussed in the Legislature now.

My post did not say anything about legislating specific technology. I did say Google Apps would be a good first move for a state CTO.
re: The CTO position and centralized vs. decentralized IT.

For core services such as email and calendaring I don't think there is any question that a single solution administered by people with domain expertise is preferable for many, many reasons. Document management gets a little fuzzier because you have varying requirements. Its likely some of them could be handled by Google Docs and others may require domain specific solutions.

I agree that a bad or mediocre CTO could be worse than the status quo, but a good CTO could save us millions while providing better systems for state workers. The best move for Lingle would be to put together a panel of industry experts to advise her on candidates.