Kuehnle AgroSystems CEO Adelheid Kuehnle is bringing a new business paradigm to the biofuel and bioproduct industries. Instead of creating a few algae strain products marketed to wide verticals, Kuehnle is able to tailor strains to specific customer needs. Their strains can be optimized for a particular salinity, set of contaminants and target product. In addition to producing algae cells with high lipid content, the algae can be optimized for particular uses of the residual biomass. These uses range from animal feed and nutritional supplements to cosmeceutical products.

Algae is considered to be one of the most promising biofuel options because, unlike other biofuels, it doesn't compete with humans for fresh water, takes up comparatively little land (or ocean) space, is not a food-for-fuel product and can cleanse water. Because of its density, high speed growth and ability to grow in containers with depth, an algae farm can yield between 10 and 100 times more energy per unit area than other biofuel crops.

Kuehnle differentiates itself from the competition by utilizing a two prong approach. The first process employs breeding, specialized farming systems and harvesting techniques to reach the optimal natural state for a particular purpose. If required, a second optional process employs genetic engineering to fine tune the strain. This approach is made possible by Heidi's expertise in plant breeding and Head of R&D Michele Champagne's background in molecular genetics. Heidi and Michele have been working together in academic and commercial ventures for the past ten years. The company employees four additional PhDs, including three local hires. It's exciting to see this kind of scientific brain trust forming in Hawaii. It is with great pleasure we introduce Adelheid Kuehnle as this month's Featured Scientist.

Note to KAS investors: You will be happy to know that when we leave the Manoa Innovation Center between 8 and 9 most nights, Heidi and Michele are still working. :-)

Dr. Kuehnle has over 20 years of experience in plant breeding and biotechnology. More than two dozen tropical flower varieties developed by Dr. Kuehnle are now cultivated and traded globally. She is on leave as Professor from the University of Hawaii, Department of Tropical Plant and Soil Sciences, to devote her entrepreneurial talent to Kuehnle AgroSystems, Inc.

Dr. Kuehnle has a BA from Middlebury College and a PhD in Plant Breeding from Cornell University. Kuehnle has authored six books and book chapters, more than 60 scientific papers, and is an inventor of 14 patents. Recently, Kuehnle was named the 2008 Scientist of the Year at the University of Hawaii, winner of the 2008 Hawaii Technology Industry Award, a finalist as 2008 Pacific Business News Business Woman of the Year, and she received the Governor’s Innovator Award in November 2008. 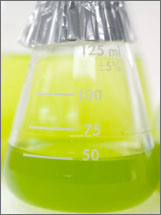 Kuehnle AgroSystems’ mission is to be the seed source of elite algae for the world's developing biofuels and bioproducts industries. The company’s technologies enable diverse industrial production for nutraceutical, feed, and specialty chemical compounds in algae and other plant platforms. Profits are generated through royalties on use of technologies, plant strains and supply of certified seedstock. It employs numerous graduates from the University of Hawaii and actively recruits qualified kama’aina from outside the State. KAS is the recipient of numerous SBIR awards from the National Science Foundation, the United States Department of Agriculture, the Department of Defense, as well as contracts originating from the Office of Naval Research and the Defense Advanced Research Projects Agency. The KAS website will be launched in April 2009.


KAS origins are unusual as it was based on three inventions patented, as co-inventors, by the father-daughter team of Heidi and her engineer father, Dr. Manfred Kuehnle. Manfred is a successful serial entrepreneur in his own right and a continual inspiration to the company’s leadership. The company is a woman-owned small business.

Comment by Mika Leuck on March 5, 2009 at 7:29pm
Its great you had the opportunity to work for such an exciting company. What kind of work did you do for them?

Comment by Robert Lee on March 5, 2009 at 5:33pm
I was an intern at KAS two summers ago. The research I participated in back then was very exciting, and it's great to see that Dr. Kuehnle and her company are doing very well.

Comment by Mika Leuck on March 4, 2009 at 8:38pm
Heidi told us her backup plan is to create algae that produces vodka. I like both ideas :-)

Comment by Cameron Souza on March 4, 2009 at 4:38pm
Can this algae be used to process waste water or consume carbon dioxide?

Comment by Dave Takaki on March 4, 2009 at 4:01pm
So, are these closed system bio-reactors dependent on ambient light for the energy input? Your research may also have applications in growing out copepod nauplii and krill. Do you work with high lipid algae suitable for krill and copepod growout? Like, say, Rhodomonas salina.