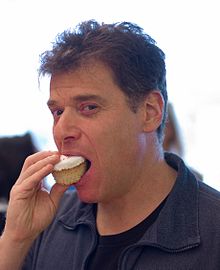 In one of the worst editorials on CNN this year Andrew Keen, a man who once compared the social web to a "communist society", suggests US and EU regulators solve the "Google problem" (read: success) by filing lawsuits against the company and telling them what they can put on their own site. He makes the completely unsubstantiated claim that Google "undermines entrepreneurial innovation" and implies they are an impediment to the Internet of things being discussed heavily at Le Web. Mr. Keen writes:

As the future arrives on all our devices and "the Internet of things" becomes a reality, it is essential that this Google problem, which is undermining entrepreneurial innovation, is resolved.  An Internet of things must be a place of all of our things, not just Google's things.

Google has been a champion of open platforms, net neutrality and data democratization. Their many excellent open source projects have enabled thousands of tech entreprenuers (including this author) around the world. They've used their money to lobby against laws that stifle innovation and free speech, fought censorship in countries that intimidated other tech giants and enabled thousands of small businesses to flourish by making them discoverable.

And as Google products such as its self-driving cars and data goggles pioneer this brave new world of intelligent devices, it is essential that the FTC and the commission guarantee that the ubiquitous Google search engine doesn't degenerate into a platform for this increasingly powerful company to hawk its own intelligent products and services.

A company is using its own site to hawk its products and services? Unthinkable! Would I prefer Google make all preferential rankings clearly marked? Yes, but I don't want the government to dictate this to a company that is providing me with a valuable free service. If I don't like the way Google promotes some of their other products and services in search results I can vote against them by using Bing or Yahoo.

Is Google a perfect altruistic champion of all things good and holy? Of course not. Its a company responsible for creating value for shareholders, but as tech giants go, Google has done an admirable job of balancing profitability with being a good corporate citizen.

Mr. Keen and US / EU regulators: If you don't like Google's search results feel free to use Bing. Google has arguably done more to enable innovation, free speech and transparency than any other company in history. To suggest we are all suffering from a "Google problem" that is stifling innovation is the height of absurdity.

Comment by Brian on December 27, 2012 at 7:41pm
Just catchy headlines to grab attention. Like those terrible "10 reasons the iPhone 5 will suck" articles.

Keen and the likes are incredibly annoying. Not because they have anything productive or even remotely interesting to say, but because they create noise that has to be dealt with before moving on the things that actually matters. It can be likened to the whole Obama birth certificate nonsense. Nothing would actually happen in the news media until it was dealt with. They are diversions and should be dealt with in that way. IGNORE IT.

I'm sorry for hijacking your article, but I think it's good to talk about innovation.

Another large argument on strangling innovation comes big this year, it's the ongoing patent's war.

Remember the ridiculous "round corners" patent from Apple against Samsung?

- Research in Motion vs Motorola

Some of the cases may be justifiable, but most of these are really noise.

You can take a look at any of these cases, I picked up reference 108 as an example.

Nokia sues Google for their Nexus 7 for IEEE 802.11 WiFi standard.

To me, I think it's a huge issue when a company somehow owns "standards".

"Hey guys, I own this C++ standard, now you have to pay me every time you write C++ code."

Now, imagine I have an idea (or rather, an innovation) for making a phone.

Where do I exactly go with that? There are thousands of patents to gather.

Everybody's playing a game of Monopoly.

The corruption article you referenced is interesting. Thank you for the link.

In case you haven't noticed, the US media has been filling itself with a lot of noise to generate revenue and to fill time-slots (for 24 hour reporting), this is a case of that.

Rather than talking about a particular company stifling innovation, it's better to talk about how corruption has been strangling innovation published by the Harvard Business School.