A Visit to the Computer History Museum 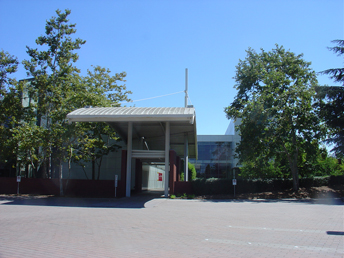 Entrance to The Computer History Museum Mountain View, CA Nestled between the Google campus, LinkedIn and downtown Mountain View, is the Computer History Museum. Housed in the original headquarters of Silicon Graphics, the museum is the largest repository of computer equipment artifacts in the world. I never knew of its existence until I stumbled upon it a year ago while visiting a cousin in Mountain View. We use computers everyday yet we often take for granted what we know about them. But to take the tour at CHS is to gain an overview of the computer evolution and appreciate the pioneering efforts made into developing it into what it is today. It was refreshing to see up close the actual artifacts of its storied development. The permanent main exhibit “Visible Storage” is a journey back in time that will take you back to your earliest experiences with the computer you first used. It is like a physical timeline from the earliest computing devices like the abacus to the iconic first examples of recorded data (the first census machine albeit a replica). The first display you see upon entering is a large rack loaded with the early PC’s and Macs. High atop the rack I saw the TRS-80 by Tandy, the first computer I ever used. You’ll also see an Altair 880. It seems many of the displays were found in a warehouse in Germany for a planned local museum but then destined for oblivion when financing fell through. The CHS, with the help of software maker SAP and the German government secured a few containers worth of it and had it shipped to CHS. The collection includes all of the major equipment advances from the first PC’s to Google’s first server to supercomputers to massive missile tracking machines to the first internet packet server. We were guided by a docent named Diane who performed market research on the Cray 1 Supercomputer for Seymour Cray . She provided us with a deeper insight into different aspects of innovations and explorations along the way. It was pointed out to us to observe how the hardware interfaces changed in time from hand-wired boards and switches to the modern keyboard. One thing I remember was how the typewriter was used as the primary keyboard interface for years in different configurations as attempts to minimize mechanical key conflicts that would slow down the typist. Another display was on the first disk drives among them a 3 foot diameter hard disk. During the 60’s a lot of developmental research was being done at schools like the University of Wisconsin (the WISC), University of Illinois (the ILLIAC) and how the tumultuous campus scene of the late 60’s shifted the work from the college campus to government labs out of concerns of national security. Equipment for defense was also seen in the first onboard guidance computers for the Minuteman 1 intercontinental ballistic missiles. Or how the important life safety concerns of the Apollo missions helped influence the life cycle concept for computer software. There is also a small display on computer graphics that includes the iconic real world original “Utah” Pot or “Newell” teapot named after Utah grad student Martin Newell who purchased it at a department store. Made by Mellitta, this is the actual teapot used to create the original 3D model to test out different rendering algorithms. It was noted that the original teapot is around 30% taller than its CG iteration because the early displays only worked with rectangular pixels . Also included in that display is the SuperPaint system developed by Xerox PARC, a Rand graphics tablet and an early Pixar Image Computer. The CHS also has a number of Cray supercomputers on display in successive iterations. There are other small displays outlining the development of gaming consoles, calculators, tape storage, robots, integrated circuits, UNIX, and even RAM. During my visit there was a traveling exhibit, an exact working replica of Charles Babbages’ Difference Engine, the device used in solving polynomials. The device on display was built in London to exacting measurements from the original drawings. Weighing 5 tons, even with a 4:1 clutch cam to facilitate ease of cranking, the docent who demonstrated its use perspired after 10 full cranks. The Computer History Museum was an unexpected discovery. Its worth visiting if you’re in the San Jose or Sunnyvale vicinity. Quaint downtown Mountain View is nearby as well. The Computer History Museum 650.810.1010 http://www.computerhistory.org PCs in History 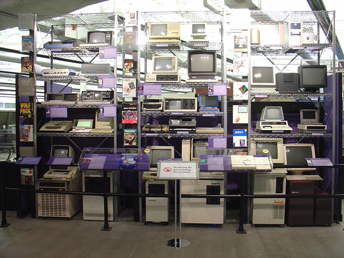 Can you find YOUR first computer? 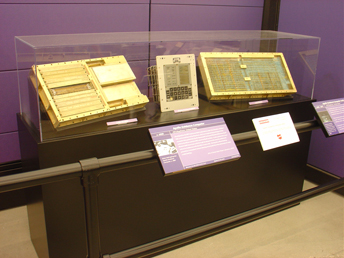 An Early Apollo Space Program Onboard Guidance Computer (1961-1971) During Apollo 11's landing on the moon, the computer used to control the descent had just 365KB of memory. 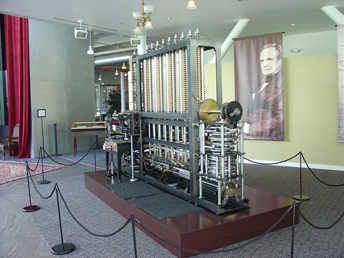 Google Production Server (1999) One of the Original 30 Racks 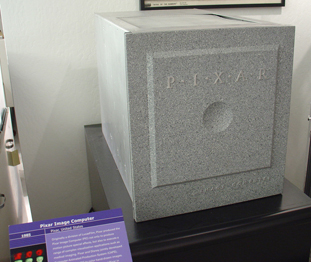 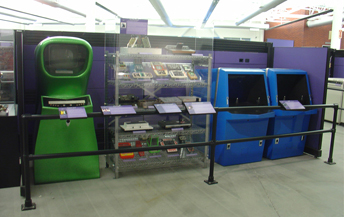 Display of The Development of Video Games and Consoles "Computer Space" arcade in green and blue "Galaxy" arcade machines.