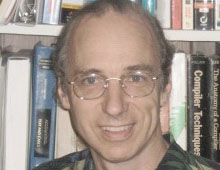 I met Clifton in 1995 shortly after he launched LavaNet with current HTDC Executive Director Yuka Nagashima. It was immediately apparent Clifton had a rare mix of great tech skills and keen business acumen. At the helm of award winning LaveNet Clifton helped bring quality internet service to Hawaii. He is definitely a key player in the evolution of Hawaii's internet space and this month's Featured Techie.
Bio
Clifton Royston has worked with computers professionally since the mid-'70s, when he began programming IBM "big iron" as a teenager. After getting a B.S. in Mathematics from the U. of Chicago in 1980, he moved to Hawaii and worked for the UH Computing Center and other companies before joining VeriFone, one of Hawaii's first high-tech successes. As employee #25, he was there when VeriFone was a small start-up quadrupling in size each year, and stayed with the company as it grew to become the world leader in transaction terminals. His work for VeriFone included developing real-time firmware, computer languages, and C compiler suites, and co-authoring a software patent for downloadable programming languages (before becoming convinced of the evils of software patents.) In 1994 Clifton co-founded LavaNet as its initial President, to bring quality public Internet access to Hawaii. During the next 4 years, LavaNet developed an extraordinary reputation for quality of service and won numerous awards including repeatedly winning Best of Hawaii polls. In 1998 Clifton became LavaNet's Senior Systems Architect, responsible for LavaNet's email and network infrastructure. In 2003, Clifton co-founded Tiki Technologies as a spin-off from LavaNet to develop anti-spam software, and acted as its Chief Technical Officer until Tiki Technologies shut down in 2005. In 2005, Clifton launched his personal consulting corporation I and I Computing, which has continued development of the Scora antispam software, among other projects. While I and I Computing continues to do some consulting work, Clifton is currently developing software in C# as a Senior Software Engineer at Sanjole, Inc, a Hawaii-based start-up creating test equipment for the WiMAX and LTE wireless broadband protocols.
Favorite programming languages: ANSI C, Perl 5, and recently C#
Favorite operating system: FreeBSD

Comment by Laurence A. Lee on July 31, 2008 at 8:59am
Oh wow, what a blast from the past. I remember Clifton and the whole LavaNet gang way back when everyone was scrambling to build up their dialup subscriber base. In fact, I chose LavaNet over the competition because Robert Brewer, a college classmate of mine who was known for his "mad, mad skillz", was also heavily involved in that venture.

Comment by David Lassner on July 30, 2008 at 11:55pm
Still have the flowchart of the UH Computing Center "funny money" accounting system?