Is Social Media an Over-Hyped Fad?

A question I received during a recent lecture: "Isn't this just an over-hyped fad?" 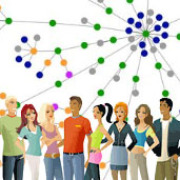 Its definitely over-hyped, but even after the dust settles, social media will continue to provide real value for those who use it wisely. We found most of our team on TechHui, and 90% of our leads come from social media and SEO. The same is true for numerous other interactive design and software development shops in Hawaii. This makes us happy :-)

Permalink Reply by Mika Leuck on October 18, 2009 at 2:37am
Other companies in Hawaii doing interesting work with social media: StarrTech (Anthology Marketing Group), Kanu Hawaii, Our Town 808, Chi.mp, Ginx, Barefeet Studios and many others!

Permalink Reply by Derek on October 18, 2009 at 7:39am
I agree it is becoming over-hyped, but I donʻt think itʻs being over-hyped by actual Social Media folks, but rather by traditional media.

I believe also, like Dan, that social media will continue to provide real value for people who use it wisely. The thing is, more people donʻt know how to use it wisely than those who do.

On a very basic level, social media can be used to create, develop, and organize audiences which I think there is real value in. Maintaining and further developing those audiences successfully is not easy for everyone. TechHui, in my opinion, is an example to follow.

Permalink Reply by Nate Sanders on October 18, 2009 at 9:13pm
It's a bubble, but not a fad. I think there's huge value to it, but right now there are too many networks/sites/etc. It reminds me of both the initial web bubble and also of Web 2.0. There are too many people trying to get rich with sub-par offerings.

Permalink Reply by Sheila Bernardo on October 19, 2009 at 12:26am
Some companies view social media as a cost of business -- "Everyone else is doing it so we must too". When the momentum stalls or never picks up steam that's when those stakeholders wonder what happened? Their focus usually ends up on just the build and initial launch, not post-launch maintenance or even the full product lifecycle. Net, net, more companies should really think through their social media plans, including where it fits in their overall marketing strategy. It's all too easy to set themselves up to fail by doing too much or not enough. For social media to succeed, end-users need to feel vested in the experience, and companies need to be willing and able to actively participate. It's great to see more companies, locally and on the mainland, hiring social media resources to address this need and provide thought leadership across the organization.

Derek: I agree it is becoming over-hyped, but I donʻt think itʻs being over-hyped by actual Social Media folks, but rather by traditional media.

It has been amusing watching the national news organizations initially ignore and then vigorously (comically?) embrace social media. Around six months ago CNN started quoting tweets in many articles relating to foreign conflicts, even when little if anything was known about the source. I found this to be utterly bizarre.

Nate Sanders: It's a bubble, but not a fad.

Sheila Bernardo: Some companies view social media as a cost of business -- "Everyone else is doing it so we must too". When the momentum stalls or never picks up steam that's when those stakeholders wonder what happened? Their focus usually ends up on just the build and initial launch, not post-launch maintenance or even the full product lifecycle.

You are spot on. We've seen this quite a bit with online community efforts by schools, large non-profits and various government organizations. They feel like they have to do something, so they budget for a flurry of work to get something out the door. Six months later its a ghost network because there was no core of passionate team members and no money budgeted for the ongoing content development and promotion necessary to sustain the community. As you rightly point out, most of the work is post launch.

Another flawed strategy we see often is organizations with smaller budgets trying to build their own online communities from scratch, when a combination of an inexpensive SaaS solution such as Ning or SocialGo, a few custom widgets and integration with Facebook and Twitter is more than adequate to meet their needs. Its the dreaded NIH (not invented here) syndrome.

Social Media has been around for generations, it wasn't too long ago that the town newspaper was the Social Media of the times, it was a common bond that held a community together, Births, deaths, marriages, engagements, store openings, closings, community photography everything was in there... social media no?

In a sense, but the "social" portion generally refers to the content generators rather than the consumers. Newspapers and magazines are produced by a relatively small set of people who control the content read by large populations.

IMHO, Facebook is the best personal social platform at the moment (this from someone who's family lives 9300 miles away!) it's my community newspaper!, it's the CompuServe of this generation... and Twitter the worst... is Twitter even really social? Personally... Twitter feeds into the already fragmented thought paths of our already distracted days. What's next? Who knows! but all these teens posting their random 140 character thoughts streams to an oblivious audience will decide!

In many cases, you are right. Twitter is as valuable as the people you follow and the people who follow you. Those who view it as a game with the objective of gaining the most followers generally extract very little value. Those who use it to interact with people with whom they have some real connection or common interest can extract value. I also find Twitter search very valuable for tracking news in places ignored by CNN and the BBC (or to which they have limited access.)

No. Social media is already pervasive throughout government, industry, and society. That's not going away.

However, just because social media as a broad tent category is here to stay doesn't mean there won't continue to be over-hyped trends and companies operating inside it. Case Study #1: Virtual Worlds and the hype that surrounded Second Life.