An Evening with Cinematographer Paul Atkins 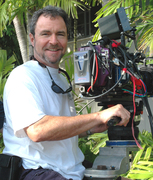 Cinematographer Paul Atkins discusses his recent works including his experience on the film Tree of Life.

From Antarctica to the tropical Pacific, Paul Atkins has filmed the world's wildlife and cultures for National Geographic, for the BBC including many of their most successful series from Trials of Life to Planet Earth, and for the IMAX screen. His internationally acclaimed cinematography and directing have earned him numerous Emmys, British Academy Awards and a prestigious Telluride Film Festival Tribute. In recent years, Paul has turned his cinematic attention to commercials and feature films including indie productions such as CHIEF(Sundance 08), and The Land Has Eyes (Sundance 04 and Fiji's submission for Best Foreign Film to the Academy Awards). On a forty-two day epic voyage around Cape Horn, Paul shot the ocean storm footage for Peter Weir on Master and Commander which won the 2004 Academy Award for Cinematography. In 2008, Paul was 2nd Unit DP on Terrence Malick's Tree of Life and continues to work for Mr. Malick as his director of photography on an upcoming IMAX feature.

RSVP for An Evening with Cinematographer Paul Atkins to add comments!