Who is it for?

App Studio is most useful for informational apps.  Companies, event organizers, conventions and bloggers can use App Studio to create a Windows and Windows Phone app to supplement their web site.  As long as the app sticks to informational content think of App Studio as similar to a basic web site builder, but for mobile apps. For developers App Studio could be a good starting point for a more complex app.  Generating the app provides the source code which can be inspected, learned from and built upon.

App Studio offers several templates to start with, hinting at what types of apps are possible: 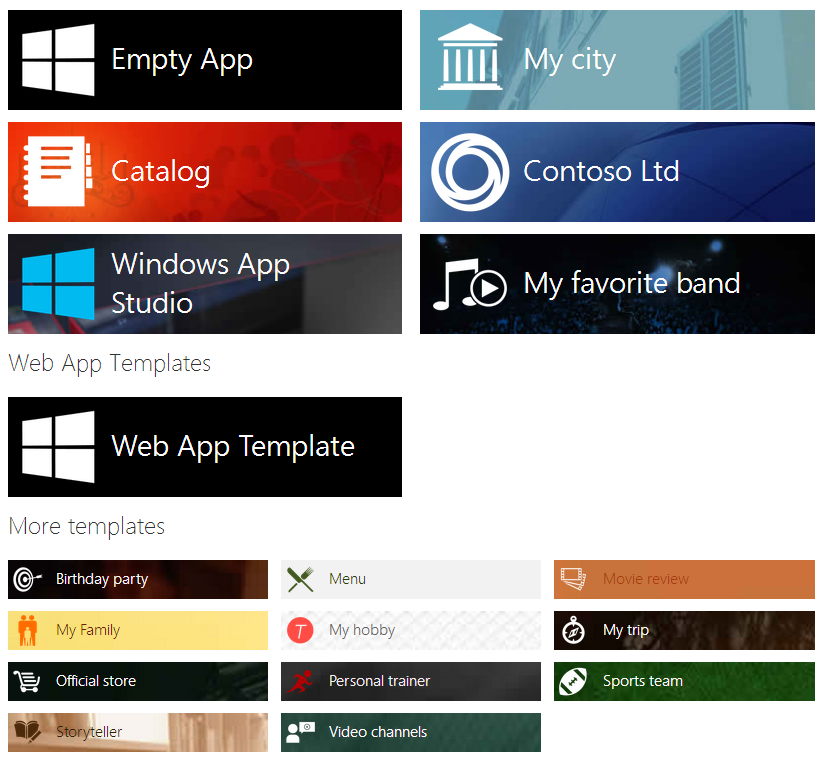 The collection section allows you to create a list of items.  You can create custom fields for the list.  Product catalogs, company listings and event schedules are some examples of what a list might be used for.  Collections can be stored in the app or in the cloud.  If stored in the app they will be available even when the device has no internet connection, however they cannot be updated unless the app is updated on the user’s device.  If stored in the cloud the information can be updated without an app update, but won’t be available without an internet connection.

The menu allows for additional sections if 6 main sections are not enough.

Themes, Tiles and your Publish Info. The Tiles configuration controls what the app’s tiles look like (small, medium and large versions).  The Icon tile selection simply shows a static image or icon for the app.  The Flip tile displays 2 tile states (front and back).  Most interesting is the Cycle template.  This allows the app to use a collection section that contains images and display those images on the Windows/Windows Phone Start screen. The final section in creating an app is the Publish Info section.  Publish info includes the app's title, description and language.  It allows linking the app to the Windows Store for publishing and sets other information about the app that is displayed in the Windows Store.  It also allows enabling of ads. Once the app content and design is done a final product can be generated.  Upon generation App Studio provides 3 things:

While limited I think App Studio is implemented well and it is simple enough for almost anyone to get into and build a simple informational app. Because it restricts the user to certain layouts and features there isn't much danger in messing things up too badly.  On the other hand those restrictions probably result in apps made with App Studio looking very similar to each other.

A couple of features I would like to see in App Studio would be a way to add form input to an app.  At the moment there is no way for users of an app to communicate with the app’s creator without leaving the app via a web or email action link.  I would also like to see App Studio be able to submit apps directly to the Windows Store instead of just providing the publish package. I think App Studio has great potential if Microsoft chooses to develop it further.

Great post! AppStudio looks like it has a lot of promise both as a DIY tool for non-programmers and a scaffolding builder for programmers working on content oriented apps (assuming the code it generates is clean.)