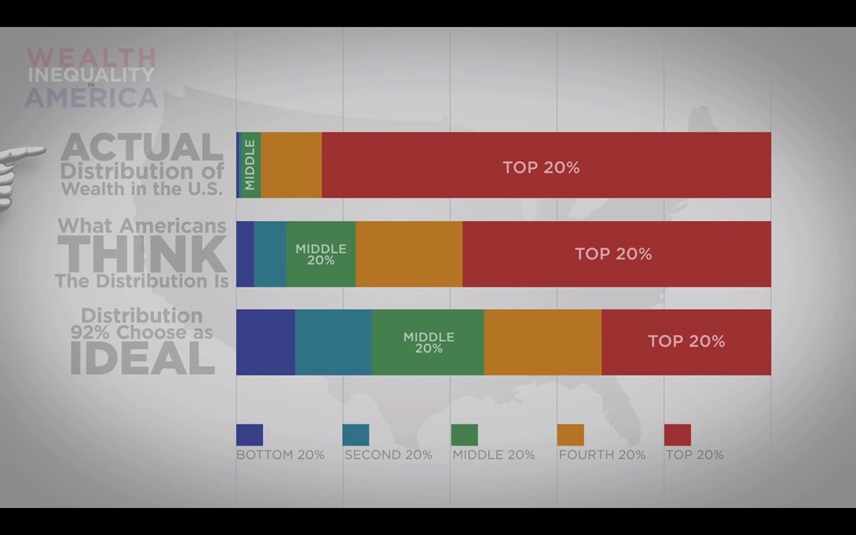 I love to travel, and over time I have had the good fortune to visit a couple of dozen countries around the world. One thing I noticed from country to country was a correlation between the wealth distribution among its populace and the overall stability of the nation. It seemed the happiest and most stable countries had a relatively strong middle class, while nations with highly concentrated wealth amongst a tiny few stood on shakier ground. This is not surprising; if the average Joe is better off then the country on average is better off. Most people can get behind this: spreading the wealth around is a good idea, and as long as your economic gains are commensurate to your economic contributions to society this is a good system.

It also occurred to me however that any relatively free economic system eventually leads to wealth polarization. The rich get richer as they leverage their prior successes to accelerate their gains, while the poor and, eventually the middle class, get left behind. Unless an artificial force (i.e. government) steps in to redistribute the wealth, the end result is extreme polarization and ultimately instability. This is also not surprising or new; most of us can get behind at least some degree of artificial redistribution of wealth (i.e. welfare programs) or power (i.e. labor unions) to reconcile this natural phenomenon.

What has come to light for many is where the United States stands today with her wealth distribution. This viral video articulates it very well. I highly recommend it as it is only a few minutes long, but tldr; => you're WAYYYYY off in what you thought our wealth distribution is. Now react to it how you will; I'm NOT commenting on whether this type of wealth inequality is fair or not (the counter-argument to the author's question is ask yourself how much socio-economic impact can you reasonably attribute to the average Joe, versus say Steve Jobs). What I AM commenting on is that wealth polarization is very real and relevant today.

Now what happens when this is played out over the years? Looking back over the millennia, it seems that regardless of time, geography, and culture a large disgruntled, impoverished majority inevitably leads to a bloody revolution with the incumbent elite overthrown, followed by decades of rebuilding without ever quite reaching the prior pinnacle.  Are we doomed to repeat history? I don't know, but it seems things may be different this time around. Looking forward through the lenses of science fiction works about dystopian futures, a likely outcome may be impoverished masses getting by on a subsistence living with a very small minority holding most of the wealth and power. Think about scenes depicted in Blade Runner, or Dredd, or the upcoming Elysium for example. In other words, we keep heading down the path of polarization without the big violent revolution at the end.

I call this outcome "likely" because it seems that our cumulated advances in technology, manufacturing, medicine, automation, communications, transportation, etc. have drastically lowered the "cost-of-subsistence-living" than any other point in human history. We don't need everybody earning their keep in society just to stay alive anymore. Due to aforementioned advances, increasingly so, many can live off the backs of the few. A welfare dollar goes much further today in keeping someone alive and content enough not to incite revolt. Not in the same words, but that is what this article from Tech Crunch is saying. Recommended read but tldr; => Many jobs will be eliminated due to automation and technology. Many people will just manage to get by, more will come to rely on welfare, and the very small elite will be technocrats, financial barons, or heirs to fortunes.

While this outcome I believe to be "likely", it certainly doesn't seem "satisfying". Few people actually enjoy the concept of welfare, on either the giving or receiving end. Even fewer enjoy the thought of the masses living just a subsistent standard and only getting by. Some frame this vision of the future in a more positive light, as "a world without the need to work". You decide, but I put forth a different vision of the future. Unsaid in the Tech Crunch article and The Guardian article it references, is the assumption that only a minority can engage in the technology work force of tomorrow. I don't necessarily subscribe to this. The demand for technology workers is clear and present today. By its very nature, the technology industry is innovative and creating opportunities with even more demand tomorrow. The question is one of supplying that demand. What if the average worker of tomorrow is that much more cerebral, more skilled, agile, and competent; more rigorous and disciplined in their training, yet more creative in their problem solving? That will mean productive impacts on society will not be effected by a tiny minority, but by many. Smoother wealth distribution then naturally ensues. That will also mean the potential for societal advances in sum will be THAT much greater, unleashing not the dark, high-tech dystopian slums of Blade Runner, but a brighter, more productive and satisfying tomorrow. And I think that is something we can all get behind.