When I was in high school I read about research at the University of Hawaii in small scale self contained ecosystems. The idea fascinated me so I started doing research on how I could build one. In Des Moines, Iowa, where I lived, there is a small rain forest contained in a geodesic dome called the Des Moines Botanical Center. A scientist at the center helped me with a design for a miniature version of the center with the addition of a cave environment below the terrestrial and lake environments. My design, which I built with help from my dad, was a Plexiglas dome mounted atop a box with a cylinder in the middle that served as a lake environment. The  idea was to support three mini-ecosystems in one small enclosure - a terrestrial environment, a lake environment and a cave environment. I was successful with the first two but had trouble with the cave environment because I didn't have access to any caves from which to harvest the cave animals, fungi and bacteria necessary to build a cave biom.

A few years later I designed a new system consisting of a much larger dome atop a cylinder atop an octagonal pyramid. Inside were cascading fresh and saltwater waterfalls. Unfortunately when I priced the design it came to $18K, which I couldn't afford on a 16 year old's grass-cutter's salary. To this day I remain very interested in the idea of aquaponics and self contained ecosystems that are both functional and beautiful. Right now I'm concentrating on growing our software development and design business, but for my next venture I'd like to build aquaponics sculptures that bring small scale aquaponics into more people's homes. Perhaps the various biomes (saltwater, freshwater, terrestrial, cave, bog, etc.) could be like lego pieces that people put together in unique configurations to create their own little biosculpture worlds. 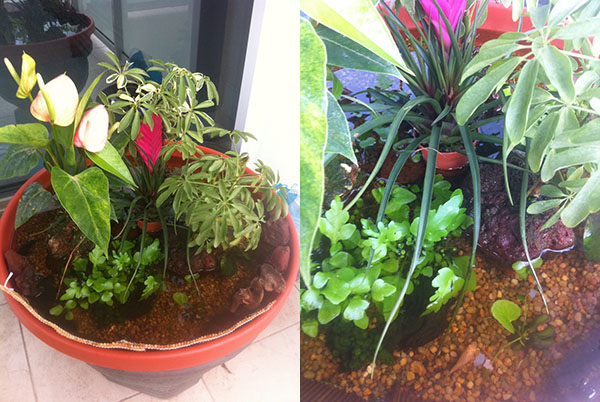 Comment by Daniel Leuck on March 24, 2011 at 6:38pm
@Sandy - Very cool. Thank you for the links. I know a few TechHuians including Derek and Olin who have micro-aquaponics setups at home.

Comment by Sandy Gabrielli Dunn on March 24, 2011 at 12:58pm
Check out the Green Machine in Makiki http://www.pidfoundation.org/programs/green_machine/about and the projects at Honolulu Community College. Not so small scale like this wonderful gizmo! Also found this link to a project at the state hospital that seemed really wonderful http://www.staradvertiser.com/features/20100728_Spiritual_growth.html but not sure if its still going on.

Would be great if I could just buy a plug-n-play aquaculture appliance that connects to the internet, communicates with some company's server that provides remote monitoring, has a web-based configuration interface, automatically orders refillable supplies (e.g., seeds, fertilizer, etc) to be shipped to me.

It would! The original design included software to monitor air and water quality as well as regulate, release treatments, fertilizers, etc. We didn't have the web back in the stone-age when I was in high school, but if we built it today it would definitely be web connected.

Have you read The Diamond Age? You could combine tech and water treatment like they do in the novel ;)

I haven't. Thank you for the tip. I'll check it out.

Comment by Brian on February 22, 2011 at 2:06am
Have you read The Diamond Age? You could combine tech and water treatment like they do in the novel ;)

Aloha e Truman. Its great to hear from you. How are things going in China? We hope to see you and Elizabeth again soon.

I was really interested in Biosphere 2 and very disappointed by its failure. I visited the facility eight years ago and stayed overnight. It was fascinating. The idea was great, but they really failed on implementation.

Comment by Truman Leung on February 21, 2011 at 9:44pm
Cool, Dan. I couldn't help but go online and do reading about setting up a tabletop biosphere of my own and the history of Biosphere 2. Interesting stuff. I hope you do start an aquaponics business one day. I'm fascinated with the idea of growing my own aquaculture vegetables, fish and shrimp but am too lazy to learn how to do it. Would be great if I could just buy a plug-n-play aquaculture appliance that connects to the internet, communicates with some company's server that provides remote monitoring, has a web-based configuration interface, automatically orders refillable supplies (e.g., seeds, fertilizer, etc) to be shipped to me. It'd be great to have a mini chicken farm system, too.