Is Facebook's New Graph Search Engine a Danger to Google?

Facebook announced the launch of a new smart discovery engine that, for now, will focus on four areas: people, photos, places and interests.

It uses the power of your own network to give you highly personalized results for your search queries. Results will be ranked according to your friends and friends friends interactions.

Does this mean the end to Google, LinkedIn, Yelp, Foursquare and the rest?

I asked Robert Scoble if I could share his thoughts here, and he agreed. The following is from the discussion on Quora:

Robert Scoble (studies tech for Rackspace): It is a threat, but only in the long-term if the others don't react quickly. I've used the new search engine quite a bit. Yes, it is disruptive to many of those competitors.

Just so you know where I'm coming from, I study how others use Facebook and have built several lists, including these:

But to more directly answer the question.

Let's say you want to find a Mexican Restaurant near you. Where do you go? 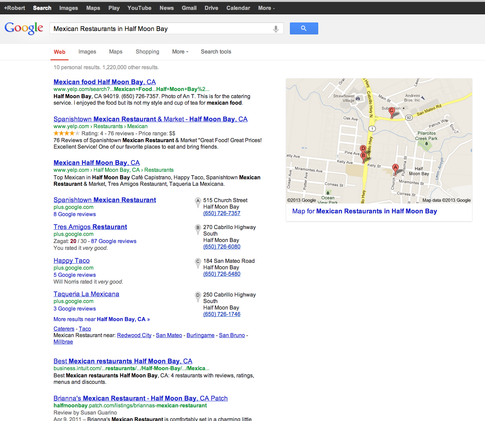 Google? Sure. You coud search for "Mexican Restaurants in half moon bay ca" like this: Page on Google.com
You get a list of stuff, some of which have reviews, some of which are noisy intermediaries (http://business.intuit.com directory shows up, for instance). But which one is REALLY good. Which ones do the locals like? Which ones have your friends liked?

Heck, on the Google Result is a restaurant that's been closed for months (brianna's). Google isn't good at cleaning out old stuff (Fourquare, Foodspotting, Yelp, are much better at this).

Notice Brianna's is on Facebook too. I reported that, lets see if it gets removed quickly. 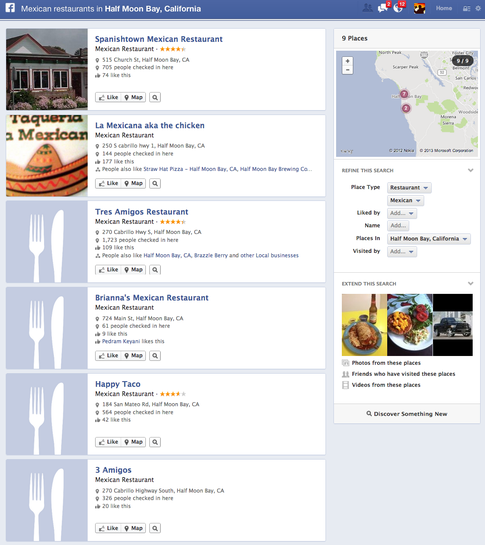 Let's try this on Yelp. 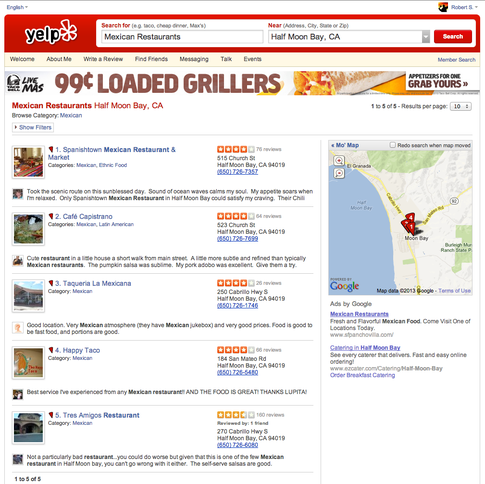 But what's missing from Yelp? Friends! The reviews are from people you don't know, and it's very hard to figure out who the reviewers are because Yelp doesn't force real names or a real identity system.

Which will happen first? Yelp gets real names and real people, er, friends of yours, or Facebook gets the detail and search quality that Yelp has? I bet on Facebook getting there first. 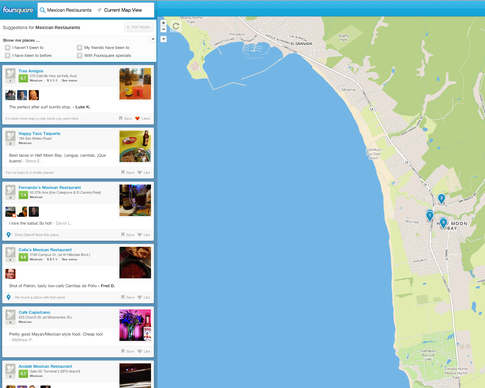 I like Foursquare for its "explore" feature on mobile phones and also for the tips that people leave on places. But the others clearly have more data. That said, this view doesn't really show Foursquare's advantages well, which are really in the tips for each restaurant (I find they are easier to use and more accurate than your average Yelp review).

Here's the tips for Tres Amigos, my favorite Mexican place in town: 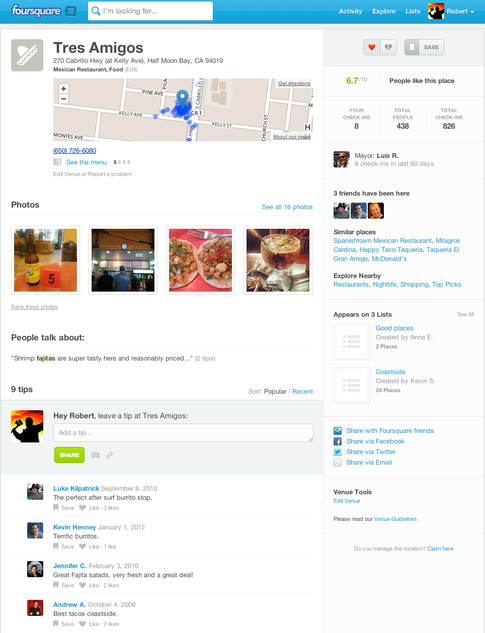 Can Facebook match the tips today?
Nope, but it could within short order just because of the number of people who use Facebook and who write about each place.
I know you didn't bring it up, but let's look at Foodspotting. 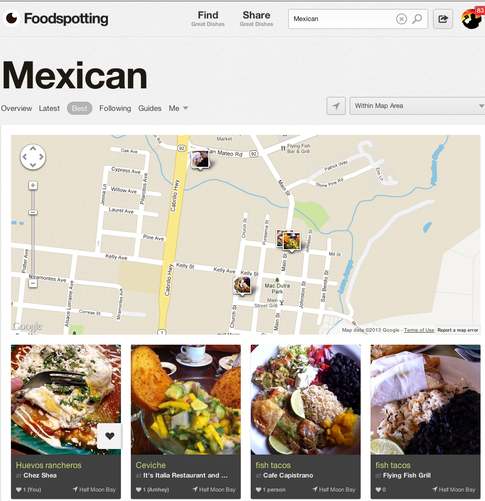 Here you can see photos of food, which is really awesome. You also get lots of Facebook-style likes and interactions on the pictures. Do they get disrupted by Facebook's search? No. They offer something that Facebook can't match. Yet. Photos of food taken by real people.

What is LinkedIn really good at? Finding people in business. Some for hiring. Some to help with a project. Etc. etc.
So, here's a search about Twitter on LinkedIn. LinkedIn is really good at this. 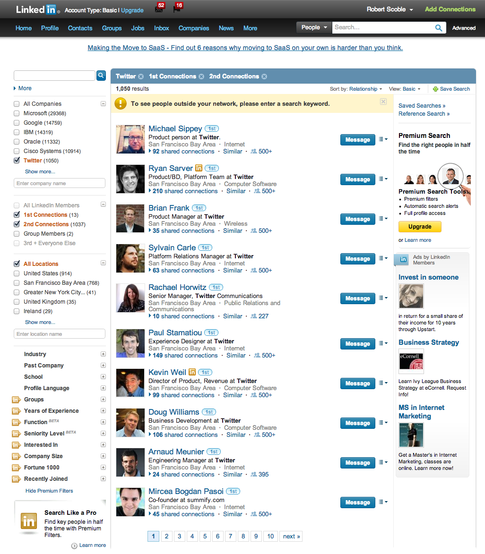 Let's do a similar search over on Facebook using the new Graph Search: 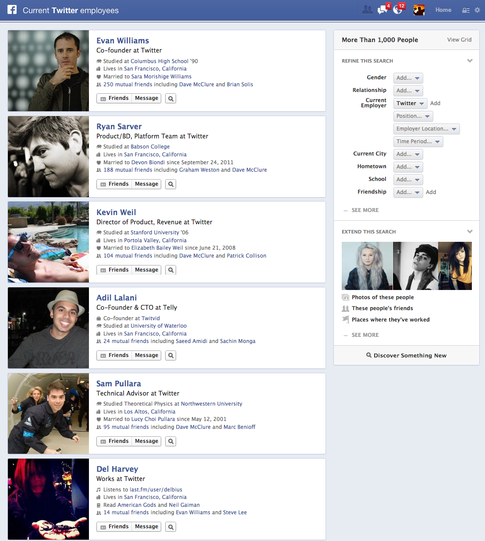 Shoot me, but the Facebook one looks warmer because I can see who connects us.
But lets go further. Let's look at Twitter employees who like programming. That's hard to do on LinkedIn because there isn't a common "like" system over on LinkedIn: 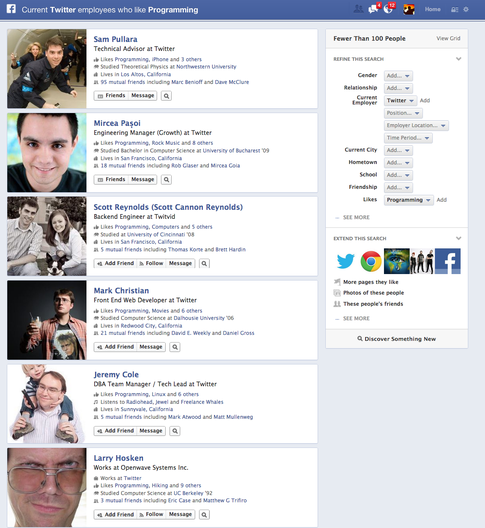 Yes. Facebook has done something disruptive. As it gets better it will take value away from the other places that people do searching for things.

Some limitations with Graph Search today:
If I were working at one of the other companies I'd be spending a lot of time thinking about how we would counter the threat of a Facebook search/discovery system. The others have time, but not much.

Will it dent any of the other's profits or such short term? No. This is a long-term threat. But that doesn't mean it's any less disruptive or dangerous.

Comment by Brian on February 21, 2013 at 2:25am
No mobile search is a big flaw. Who looks for restaurants from home compared to when out?

Big advantage google has is search is part of its branding. People know to use it for search. Whether or not your Facebook friends eat there is only relevant if you share tastes which is not always true.

Some of your statements are just wrong. It is really easy to search for people with skills on LinkedIn but you need the pro feature for that to work well. For their user base it makes sense. If you're a successful headhunter etc its just a business expense. I have many "real" friends on yelp and social there works pretty well and it does use real names contrary to your statement. There are problems with yelp (shady review tweaking practices) that are much bigger for them going forward than the fact they hide people's last names (initial only).

Facebook's key weakness is its reliance on stated rather than revealed preferences. Graph search isn't really that revolutionary for them relative to how their advertising filters have worked for a while. What i mean is they already had the backend but just hadnt exposed it to most users. So its new in that sense but not "new" and interesting. The targeted ads actually reveal the weaknesses of the stated vs revealed approach.

Amazon's suggestions share the same problem when working with little information (as do most such algorithms). If you haven't bought things lately and you buy say.. Vacuum filters. It'll assume you're interested in other ones which of course is silly since most people would only own one vacuum.

So in the case of graph search maybe I'm a fringe member of a clique (common), and that clique lives in Kapolei and hence eats at Chili's often (because its Kapolei and well.. Yeah). Does that mean when I search for "food places" I want to get Chili's Kapolei because I have 30 acquaintances that eat there? Probably not.

Which isn't to say graph search is useless. I see the cases but its overhyped and I disagree it's disruptive. Its more TV and radio than mp3 and album. Google overall retains stronger search and they cleverly weave it through all their products. Facebook only really has one product (their userbase) and until they start learning their preferences rather than waiting for them to like them, their approach will retain the associated disadvantages.

Interesting blog post though and overall nicely assembled, though we may disagree.