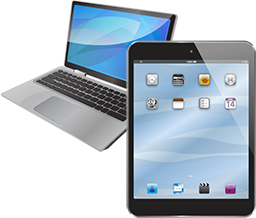 For years analysts have predicted that tablets would outship desktops and laptops. Late last year it started to happen as tablets surpassed laptops during the holidays. Within the next two years tablets are expected to consistently ship more than laptops worldwide.  The popularity of tablets naturally leads to questions about convergence.  Will Apple follow the same path as companies like Canonical and Microsoft?

Macworld recently published an article with snippets of an interview with Philip Schiller and Craig Federighi and their answers seem to indicate "no" with quotes like:

“It’s obvious and easy enough to slap a touchscreen on a piece of hardware, but is that a good experience? We believe, no.”

“We don’t waste time thinking, ‘But it should be one [interface]!’ How do you make these [operating systems] merge together?’ What a waste of energy that would be,”

“To say [OS X and iOS] should be the same, independent of their purpose? Let’s just converge, for the sake of convergence? [It’s] absolutely a nongoal,”

That is a very different message compared to other major desktop OS makers: Microsoft and Canonical who are quickly moving toward convergence.  Canonical is busy at work evolving Ubuntu into an OS that can run on all screen sizes.  Microsoft has already shipped Windows 8 that is an OS meant to work on both desktop/laptops and tablets.  Additional convergence with phones is expected.  Even Android has achieved a certain amount of convergence by being installed on shipping phones, tablets, convertible laptops and desktops.

Even though there will surely be desktops and laptops well into the future, is tablet computing where we are going next?  Will tablets eventually fully marginalize desktops and notebooks as they seem to already be doing?  We are already in a time where your tablet easily meets the computing power needed for browsing the web, reading book and email, playing music and watching movies. The iPad and Android tablets are becoming serious gaming devices.  People can feasibly use their tablet as their primary computing device.

As for myself, I’m already sold on tablets.  I’ve been looking for a good tablet pc since Bill Gates showed them off in early 2000.  Those early tablets turned out to be expensive, heavy, noisy, hot and overall not very usable, but last year I picked up a Windows 8 tablet that seems to finally deliver the vision of Microsoft’s tablet PC. For the first time I can take my “desktop” with me wherever I go.  Since I’m a programmer I went with a Windows 8 tablet and it’s worked surprisingly well over the last year. I don’t think I will ever purchase a laptop or desktop for my general computing needs in the future.

Besides your cell phone what device do you use the most?

The answer is the same as it always is: the best tool for your use cases... today. Not tomorrow, not next year — today.

Today, the best tool for my use cases is the 11" MacBook Air. Extremely portable, with access to all the dev tools I need to build things.

If I want to read articles or watch video, the Retina iPad Mini gives me a great screen, long battery life, and LTE connectivity anywhere I go.

Will these devices converge? Doubtful. Convergence is often an overrated concept put forth by tech pundits who like to prognosticate — and who are almost always wrong.

In the end, it doesn't much matter whether notebook or tablet computers become more prevalent. We'll likely have access to both for a long, long time.

PS: You've tagged this with "latop" — being a typical self-absorbed LA native, I choose to take this as a compliment.

Convergence obviously has its benefits, but I think you can sum up Apple's counterargument as, "We are optimizing the user experience for each device and, by extension, usage profile."

Douglas: Besides your cell phone what device do you use the most?

For business (at work and home) I use a MacBook with an external monitor. For leisure browsing and the occasional show I sneak in when little ones are asleep I use my iPad. When I travel for 3 days or less I take my iPad with a Logitech Ultrathin Keyboard Cover. For longer trips I take my MacBook.

I do secretly like some things about the Windows 8 tablet, but don't tell anyone I said that :-)