Over the years I've seen some really interesting font technologies come and go including Apple's GX font morphing, AAT state tables and Adobe's Multiple Master Typeface technology, some of which was rolled into OpenType. These technologies struggled because of the enormous investment required to create a font that makes use of their features, and the limited return on investment for typographers. The latter problem is largely due to the fact font designs are very difficult to protect. This is unfortunate, because features such as design axis in multiple master typefaces allow designers to be much more expressive. Each design axis provides scalar control of a design aspect of the font such as weight, width and the size of the serifs.

Designers such as Robert Slimbach spend years working on a single font. Some of his fonts have over 3,000 glyphs! Imagine doing all the kerning and hinting on a font of that size. I'm still in awe of Arno, a multi-lingual, multi-weight, multi-style, multi-optical sized humanist book font family with classic Venetian inspiration. It has the works - ligatures, terminating characters, and other alternate glyphs.

If you are weird enough to be a type junky and a Java programmer, you may be interested to know Java has API support for manipulation of multiple master typefaces, including manipulation of design axis. I was really excited about this until I learned a few months after its introduction to Java that Adobe was no longer investing in the technology. The same thing happened with Apple's brilliant GX fonts. Characters in GX fonts had intelligence. They could, for example, adjust their shape depending on context. This is extremely useful for script fonts (all languages), arabic and devanāgarī. At least some GX font technology has been preserved in Apple Advanced Typography. Unfortunately it is only available on OSX :-( 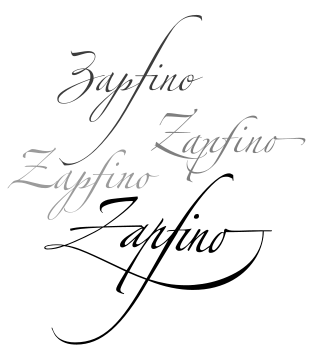 Isn't that a thing of beauty?

OK. Time for my Japanese lesson. I wonder how long it would take to do a multiple master Japanese font? That is probably what sinful typographers are forced to do in hell. :-)

Comment by Mark Enomoto on April 7, 2009 at 2:11pm
I love the idea of a "living font" where it changes depending on its context. A font like this might be interesting in a social network context in that the sender and user "do not" see the same font, and argubly the same message. Digital media is so "clean" that we have often have to create organic elements for end users. Just study the evolution of grunge type from foundries like Emigre and designers like David Carson.

Comment by Dave Takaki on March 28, 2009 at 1:21pm
I'm an old enough fart that I remember letter press and the term typographer. Although I still work in publishing and other media, Dan's comments and examples were both delightful and and eyeopener in the shifts in typography. Perhaps in the OSX environment it may have an influence in the development of "fluid publishing". Mahalo

Comment by Daniel Leuck on March 26, 2009 at 3:24pm
Exactly. Advanced font technology apparently has a very small audience. I think this would change if the web evolved into a decent medium for type.

Comment by Viil on March 26, 2009 at 1:35pm
Gorgeous examples Dan. I'm a typeface gourmet, but not a big java developer, still I can sympathize with you when a really promising and useful technology is shelved :/