New iPhone On The Horizon 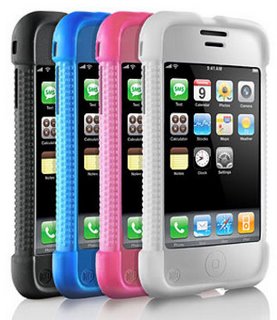 You can pretty much count on a new 3G iPhone come Monday. But redesigned MacBooks? Don't bet on it. Here's my take on what Steve Jobs will announce during his much-anticipated keynote at the Worldwide Developers Conference in San Francisco. New iPhone I'm almost certain that we'll feast our eyes on a new iPhone on Monday-one with access to speedy 3G networks along with build-in GPS, both features that are sorely missing in the original iPhone. Heck, after all the fevered speculation, Jobs could find himself dodging tomatoes if he doesn't unveil a new iPhone. Beyond that, however, the picture gets fuzzier. Will the new iPhone be thicker than the original, or thinner? Will the brushed-metal backing be replaced with a glossy black (or white) finish? There seems to be consensus on the new, glossy backing (which might scratch more easily than the old brushed-metal finish), but that's about it. And there's more: rumors that AT&T might subsidize new iPhones to the tune of $200, along with a just-unveiled patent application that reveals plans for video recording and conferencing, instant messaging, and a blogging application. The AT&T subsidy rumor (first reported by Fortune) has been persistent enough to be plausible, while the newly published patent application gives credence to (if not confirmation of) hotly anticipated features like two-way video calling. Finally: Will we get just one new iPhone, or a series of new models (and not just different memory capacities, mind you)? And when will the new iPhone be available in stores? My feeling is that we'll get just one new model, and that it'll go on sale later this month-but that's just my gut talking. Odds: 3G iPhone with GPS (bank on it), thinner than original (50-50), glossy backing (almost certain, although I hope not), video conferencing (3-1), AT&T subsidies (50-50), more than one model (7-1), on sale Monday (5-1). iPhone App store, new iPhone firmware More of a fact than a rumor-and potentially more exciting that the 3G iPhone itself. Steve Jobs teed up the App store-which will feature dozens, if not hundreds, of native iPhone applications written by third-party developers-back in March, and the possibilities are limitless. Besides the standard communications (IM, anyone?), productivity (an office suite?), and business applications, we're also talking games-many observers think the iPhone could rival the Nintendo DS and the Sony PSP as a mobile gaming device. I can't wait. Jobs is also expected to unveil new iPhone firmware, which will include such goodies as full-on Microsoft Exchange support, enhanced IT and security features, and more, no doubt. Odds: Already announced, so let's call this one fact. Mac OS X 10.6 "Snow Leopard" This one came out of nowhere just a few days ago-that Apple is set to release beta code for its next major OS release, just eight months after OS X "Leopard" hit shelves. Word is that "Snow Leopard" (that's the rumored code name, anyway) will be a "stability and performance" release for Intel-based Macs, and that it's geared toward optimizing mobile devices like the MacBook Air and the iPhone-and maybe even a new, tantalizing mystery device. It might seem a little early for 10.6 (which is supposedly slated to go on sale next January), but multiple blogs are claiming that it's a done deal. Odds: 50-50 or better. .Mac reborn as MobileMe Apple's much-maligned, $99-a-year online service is about to get a makeover-or so says the rumor mill. New features will include over-the-air syncing of Address Book and iCal info between Macs and iPhones, as well as a new and improved Web interface that lets you browse your contacts and events from any Web browser (sounds pretty basic, but it'll be a big step forward for .Mac users, believe me). Odds: Almost certain. Redesigned MacBooks and MacBook Pros Both the consumer and pro-level versions of Apple's iconic laptop lines are due for major design overhauls. Indeed, save a few tweaks here and there, today's MacBooks and MacBook Pros look pretty much like yesterday's iBooks and PowerBooks. But what little chatter there's been about redesigned MacBooks at WWDC has more or less died out in the past several days. I'm not feeling it. Odds: 10-1 "One more thing ... " It's the phrase Macheads live for-a final, hold-your-breath moment when Steve Jobs unveils some cool new device no one quite expected. Back in January 2007, "one more thing" turned out to be the original iPhone. Assuming the 3G iPhone isn't the "one more thing," what could it be? Well, there was talk last month of a potential iPhone-like tablet device powered by Intel's new Atom processor, but Intel quickly downplayed the comments that sparked the rumor. And another factor to consider: There was no "one more thing" at Macworld back in January, much to the disappointment of the Mac faithful. Anyway, there's really not much to go on here. Maybe a 3G iPhone announcement is enough for WWDC. Then again, Jobs loves surprises.