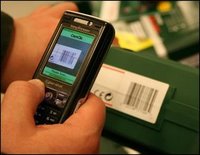 More Details: Mobile barcodes are on the verge of becoming a global phenomenon, but what exactly are they, what do they do, and for whom? We became familiar with the original, linear barcodes (or 1D), from our supermarket shopping in the 1980’s (although the technology was patented in the 1950’s). They comprise a series of vertical black lines and white spaces of variable width, representing numbers, which are read (or decoded) by a barcode reader to extract the information they bear. However, as barcodes were used in an ever greater variety of environments beyond straightforward stock control, they became longer and longer as people tried to pack more information onto them. A new generation of barcodes was devised in the 1990’s, usually referred to as 2D or matrix codes. They are formed by patterns of black and white squares arranged on a (usually) square grid and can encode thousands of alphanumeric and other characters in virtually any language. Immediately the size and capacity problem was solved, opening the way for applications that had never been considered. Another radical and exciting advancement in barcode reader technology allowed the camera in a mobile phone to act as a reader. Mobile phones can now be enabled to read a variety of 2D mobile barcodes. These include QR codes, Data Matrix, Cool-Data-Matrix, Aztec, Upcode, Trillcode, Quickmark, shotcode, mCode and Beetagg. The vast majority of symbologies are in the public domain, which means they can be used by anyone without restriction and without payment of a fee or royalty. This public approach gives rise to internationally recognised standards, global interoperability, and creates an economy of scale. This is a great boon for advertisers and consumers (both of whom are the mobile operators’ customers) because only one software client is required to read any code. For the operators, this translates to greater choice and more competitively priced equipment. Unfortunately, some barcode developers have chosen the proprietary route, which means they keep control of their own codes, the information that is permitted to be encoded and charge a fee or royalty for their use. These issues and the lack of interoperability usually means that proprietary barcodes tend to be used in controlled, closed environments, rather than in open, public systems around the world. The most common use of mobile barcodes is to request information or a service or content from a Web site. It might be details of a promotion, or a discount voucher via SMS or MMS, or to activate a download such as a ringtone, music track or game, or click to call an IVR or human agent, or buy a travel or concert ticket. The advertiser pays the set-up costs as well as its operator partner on a per-click, download, view, redeemed coupon, ticket sale or call, depending on the campaign. The key is that mobile barcodes are a pull technology, a permission-based way for a consumer to engage with an advertiser or medium. 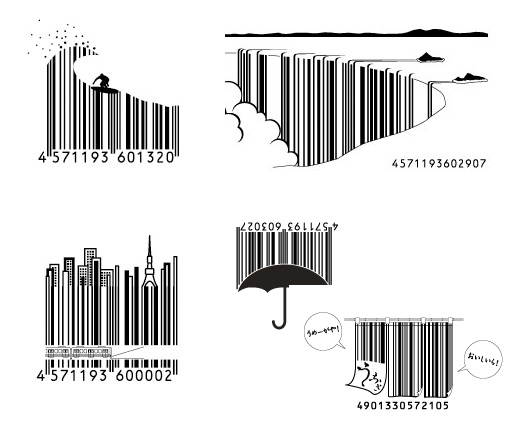 This is a very important attribute since there is a great deal of consumer angst and regulatory concern about intrusive mobile marketing: mobile barcodes are a world away from pushing unsolicited spam via SMS or MMS. Big brands are understandably wary of engaging in any advertising activity that compromises their reputation by alienating their customers and have stayed away from these kinds of push campaigns. The pull of mobile barcodes overcome these issues and offer a direct, accountable way of connecting with consumers. However, if mobile barcodes are to succeed as an advertising medium, a high level of back-office integration is necessary, which reinforces the importance of open standards for processes and interfaces. Operators will need to demonstrate to the world’s biggest brands that the barcode scanning transactions are accurate, reliable and defendable because they are going to charge that brand for every click. The precedent is there: Google has built a multi-billion dollar, online business on this per click or interaction model with its Google AdWord/AdSense, which provides advertisers with reliable, accountable records of their users’ transaction history and an accurate invoice, plus timely and granular revenue share payments to other parts of the ecosystem. In mobile, unlike online, there is the additional challenge that these mechanisms have to work across carriers, across countries and across currencies. So the stage is set. With 2D barcode scanning, advertisers have a reliable, permission-based mobile channel open to them. Consumers love them as an easy way of using mobile technology to engage with services and media they are interested in, as has been demonstrated in spades in Japan, where mobile barcodes are part of everyday life. This is because Japan is unusual in having a very dominant operator, NTT DoCoMo, which decided to endorse QR codes and ensured that all new handsets had QR code client software embedded in them. The rest is history, but this approach is not applicable to markets in most other countries, which typically have four or five operators competing against each other. The challenge now is to ensure that any brand advertiser can run the same ad campaign in Singapore, London and Seattle instead of having to produce and run different campaigns in each country and for every operator. The inability to do this has been another big inhibitor to mobile advertising. Mobile barcodes have the potential to overcome these issues and become the mainstream, global phenomenon that they could and should be. However to attain this goal, the various parties that make up the ecosystem and the various warring factions within the mobile barcode industry need to come together and work on common standards* that will be to everyone’s advantage.

Comment by GenePhillips on April 12, 2008 at 3:56am
Mika, the United States is so far behind Europe & Asia on mobile technology it just boggles the mind.

We are seeing very fast growth in the vertical as some of our new mobile technologies continue to be more widley used by the average person especially, the speed pay & go aspect of Mobile Barcodes.

Thanks for your comments

Comment by Mika Leuck on April 12, 2008 at 3:25am
In Japan, Singapore and Hong Kong many phones have FeliCa RFID smart chips that let you pay without reading a bar code.

Comment by Daniel Leuck on April 10, 2008 at 1:41pm
I ran into ColorZip while on business in Tokyo a few years ago. They started in Korea and quickly expanded to Japan where they enjoy good penetration. Now licensees are popping up all over Asia.

They seem to have a lot of IP around 2D color bar codes.