December 10, 2011 from 9am to 5pm
The 2011 TechHui conference (Twitter tag #techhui2011) will be held on December 10th at the University of Hawai'i at Mānoa Art Auditorium. The goal of the conference is to highlight interesting Hawai'i-based people, projects and organizations working in science, technology and interactive design. We seek to facilitate education and networking within the Hawai'i technology community.

Garrett Lisi is an American theoretical physicist best known for "An Exceptionally Simple Theory of Everything," which proposes a unified field theory combining particle physics with Einstein's theory of gravitation. Born in Los Angeles and raised in San Diego, California, Lisi received bachelor’s degrees with highest honors in physics and mathematics from the University of California, Los Angeles, in 1991. He earned a doctorate in physics from the University of California, San Diego, in 1999. His work has been featured in Scientific American, at TED and on the Discovery Channel. 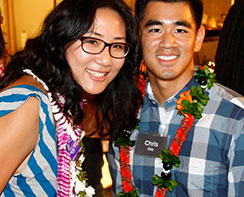 Kevin Hughes
“Great Examples of Cross-Device Design”
Kevin Hughes is an internationally-recognized pioneer in Web design and software. One of only six members of the World Wide Web Hall of Fame, Hughes developed Hawaii’s first Web site and developed “image map”, enabling interactive images within browsers. He works in Hawaii as the Chief Designer of InMobi, which acquired his Honolulu-based startup Sprout this year.

James Wang
“Software Development Communication”
James Wang was born in Shanghai, China and raised in Honolulu, Hawaii. He holds a Bachelor of Science in Information and Computer Science degree from the University of Hawaii and he is currently a software engineer at Referentia Systems. In the past year, James has become a co-founder of HI Capacity, a community organization dedicated to improving the technology culture in Hawaii. James is dedicated to becoming a better technologist and helping to grow the technology community in Honolulu.

Chae Ho Lee
“Designing for the screen: Not just a world of surfaces.”
Chae is an assistant professor and teaches graphic design at the University of Hawaii at Manoa. As an active professional designer he has worked for a number of prestigious advertising agencies and design studios in the Pacific rim, New York City and the Middle East.

Gorm Lai
“Global Game Jam – Channelling the Energy of Thousands of Creatives Across the Globe”
Gorm Lai is a veteran game developer and serial entrepreneur. He is a co-founder of the Global Game Jam, and has helped kickstart the Honolulu chapter of the International Game Developers’ Association. He is currently enjoying an extended stay in Hawaii, far away from his cold and wintry homeland of Denmark.

Nicole Hori
“Rediscovered technology”
Nicole Hori has worked as a biomedical engineer at startups including HOCOR Cardiovascular and Cellular Bioengineering. Her projects have ranged from work on development of an artificial cornea to design of artificial heart valves. Nicole is currently working as a nuclear engineer at Pearl Harbor Naval Shipyard.

Olin Lagon
“How a local nonprofit engaged over 100K+ people with $0 marketing”
Olin Lagon spent half his career starting up tech companies and the other half in the cause sector. His work helped create hundreds of jobs, many in underserved communities. He now leads social ventures for Kanu Hawaii.

April Young
“3D Printing: Uses in Prototyping, Art and Future Possibilities”
Honolulu native April Young currently serves as RAPID Technology’s Production Manager. With an artist’s heart and creative mind, her current goal is to bring concepts to life through a blending of technology and traditional approaches.