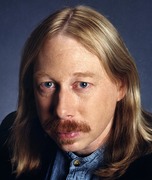 Visual Effects Supervisor and University of Hawai‘i at Manoa Professor John Andrew Berton, Jr. speaks about his experiences in the pioneering days of digital visual effects, from the development of 3D physically-based imaging systems to their adaptation to animation and effects in films such as Terminator 2: Judgment Day, Jurassic Park, Casper, Star Wars, Men in Black, The Mummy and Charlotte’s Web. Using shot breakdowns and examples from the films, John explores how digital visual effects became a vital part of moviemaking in yes, the 21st Century.

John Andrew Berton, Jr is a visual effects supervisor who has worked on many of the most important visual effects movies of the last twenty years. He was a pioneer in the field of 3D computer graphics and animation in the 1980s. He joined the renowned visual effects company Industrial Light and Magic in 1990 and contributed to such films as Terminator 2, Jurassic Park and Men in Black before becoming ILM’s lead supervisor for The Mummy (1999), The Mummy Returns (2001) and Men in Black 2. As an independent supervisor, John led international teams of effects artist to create the robots in I Robot and the lead characters of Charlotte’s Web (2005).