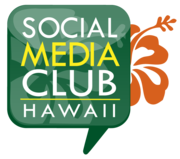 Music is in the air! Join us on Tuesday, July 13 from 6:00 – 7:30 p.m. for a look at how musicians and music industry professionals use and benefit from social media! We will have our usual enlightened discussion about best practices in social media AND we will have live music at this event in honor of our panelists and the magical Hawaiian music industry. Of course, do bring your instruments and vocals if you want to be part of the singing conversation. We’ll be doing some jamming at the end of the event.

RSVP for SMCHI - Music and Social Media to add comments!

Comment by Rob Bertholf on July 11, 2010 at 3:33pm
Our rockin’ panelists for this discussion include:

Jenn Wright: Jenn is an amazingly talented musician, songwriter, and singer. She plays with Simple Souls, is a member of the former MightyJ, and can be heard all over town playing in her own band and jamming with others. Her band Mighty J was one of the early adopters of social media – with a blog, a video podcast, and a genuine desire to connect with the fans. le Souls, the acoustic incarnation of established musical group, Kanalo, has been performing together since July 2003. What was initially a dare to play aside from their established band, Kanalo (which was then a 4-piece band), turned into a new passion for “unplugged” music and a fresh acoustic sound. Simple Souls holds it down with an acoustic guitar, percussions, 2 vocals and a killer list of songs. Follow her on Twitter @jroq.

Kenneth Makuakane: Kenneth is recognized as a successful innovator in producing and recording Hawaiian music. He has over one hundred albums to his producing credits, working with artists such as Na Leo, Hapa, Amy Hānaiali‘i Gilliom, Raiatea Helm, Obrian Eselu and Jeff Rasmussen. He performs with the multi-award winning group The Pandanus Club, composing, engineering and producing each release. A prolific songwriter, Kenneth’s compositions have been recorded by local artists as well as international artists. And his music has been on the soundtrack of major films like “Honeymoon In Las Vegas” and “Parent Trap In Paradise.” Follow him on Twitter @kmakuakane

Shawn Livingston Moseley: Shawn began his music career at the age of 4. A student of Kay Dolan, Shawn was nationally ranked by age 8 as one of the top 10 classical pianists for his age. At the age of 14 he shifted direction from competition to composition. After graduating from Punahou in ‘92 and parting with his band Dread Ashanti, Shawn graduated from Berklee College of Music in Boston, MA with a degree in Music Production and Engineering, and Songwriting. Shawn has worked as a producer, engineer, songwriter and musician in major recording studios through-out San Francisco, New York and Boston, as well as running a few of his own. Involved with artists as diverse as The Dave Matthews Band and Metallica plus many new up and coming artists, Shawn has dedicated the last 14 years of his life to producing and making records. Shawn now lives back home in Hawaii and is currenly working on his latest record “The Storm before the Calm” and teaching master classes in piano improvisation, song writing and music and vocal production. He no longer uses Twitter; we’ll ask him why.