Version control systems (VCS) and continuous integration systems (CIS) are essential to me in software development so I like to set up a system to provide these features before I am involved with a software project.

I've been recently working with Ruby on Rails projects that are deployed to Heroku.

In this post, I describe the setup I established to make use of CD in similar projects.

While almost any VCS with branching support will work, for this example, I will be using git.

We will make use of the release branches for continuous delivery.

Any changes introduced to the release lines, including the production line, will result in the deployment of that specific point in the release line to the appropriate environment. That way, the releases are traceable to the merges made.

The following diagram illustrates what the branch flow looks like with git: 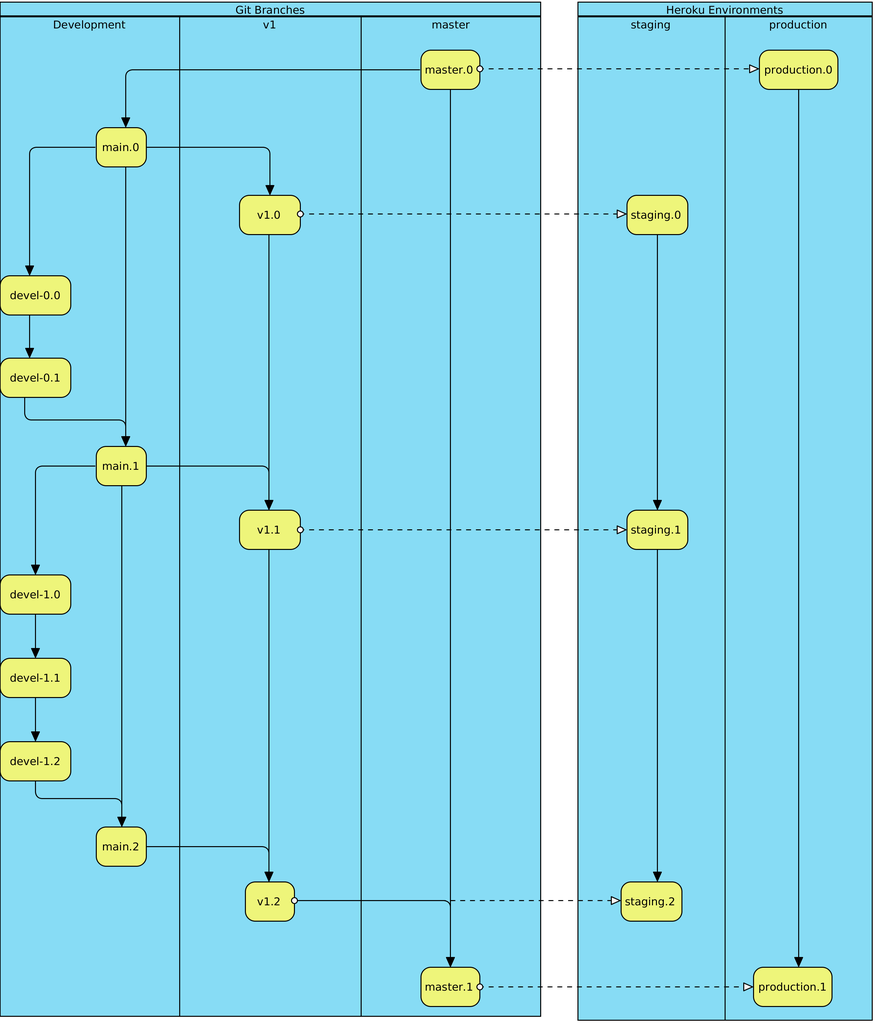 CC.rb is simply a rails app so it's very simple to get running. All you need to do is extract the downloaded contents to some directory and run "cruise start". For additional details, please refer to its official website.

While installing cc.rb is pretty trivial, there are a few server setup tasks to be done prior to running your cc.rb server:

You can configure the cc.rb site by editing the file located in $HOME/.cruise/site_config.rb. Here is what I modified:

I find that instead of adding a new project via the command line, it's easier to just get the server running, and click on the "Add Project" tab and fill in the initial project info then jump into the project's configuration file to make the fine-tune changes.

You configure your project in $HOME/.cruise/projects/{project}/cruise_config.rb.

Here is where you set notification E-mails and the build command.

The E-mail notification sends an E-mail only when a build breaks and a changeset fixes a broken build. If you want additional notification, check out the system tray applications.

I simply place a bash shell script named "build_my_app.sh" in the project directory just outside the work directory.

In the script, I attempt to run the tests and if they fail, I do a non-zero exit to fail the build. Here is an example of a build script that sets up the environment, run tests, and deploys:

# This bit was added just to check that the change didn't introduce a database
# migration that's irreversible.

# This runs the specs

# This runs the front-end tests. In this example, there is a specific task for
# this. You may need to add additional tasks as needed.

# If all is good, we finally deploy to heroku and run the database migration
# remotely in case it's needed. If it's not needed, then the migration command
# does nothing.

# This bit allows CI to automatically tag deployments in git. It's using the
# latest heroku release version as the build version and the latest major/minor
# version to produce the final latest version.

CruiseControl is pretty simple to set up and it's free. It offers simple reporting options and for my needs at the time, I found it to be suitable.

I'm familiar with other proprietary CI solutions such as JetBrain's TeamCity and Atlassian's Bamboo.

Without going into further details (probably save it for another blog post), the proprietary solutions have better reporting tools and expandability. They are very easy to install and configure builds since a lot of that is done through their web UI. I also like how build artifacts can be passed around build configurations to forward the build chain.

In summary, I see CC.rb as a quick and simple tool while I see TeamCity and Bamboo as enterprise-level suites that can scale with the organization. Either solution can do CI but the proprietary solutions offer a lot more.

Comment by Joseph Lui on December 22, 2014 at 5:53pm
Any opinion on CruiseControl versus its alternatives?