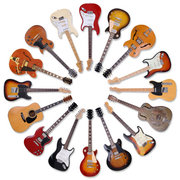 Nashville, Tennessee....April 7, 2008....Gibson Guitar, the world's premier musical instrument manufacturer and leader in music technology announced a limited edition offering of the new Gibson Robot Les Paul Studio and Robot SG Special after huge demand from worldwide fans and musicians. The demand, stemming from the release of the first Gibson Robot Guitar model in December of 2007, offers fans a chance to own one of the most sought after and innovative musical products ever to be introduced.

Guitarists worldwide have demanded another opportunity to own this revolutionary self-tuning guitar and Gibson USA has offered the opportunity through the introduction of the two new models.

Also being introduced is the Gibson Robot SG Special Ltd. The debut of the SG model comes on the heels of repeated demand from guitarists for a model sporting the SG style with the robotic self-tuning technology. You need to be a member of GUITAR WORLD to add comments!

Comment by Kurt Olsen on July 8, 2009 at 2:36pm
Hi Everybody, Our new band, which after much discussion is going to be named "Royal Gypsy" will be doing our first gig at the Higher Ground Coffee and Music Cafe in Wahiawa at 9pm on the 17'th of this month (Friday). It's original rock-n-roll, it's sounding pretty good to my ears and I'm hoping some of you folks will put down your keyboards and support some local music that night. Our lead/singer songwriter is Alex Levine and you can hear the material we've been working out on his myspace page: http://www.myspace.com/alexlevinemusic
Thanks for listening and hope to see you there.

Comment by Daniel Leuck on April 12, 2008 at 7:01pm
TechHui member Eric Meyer (aka Sub Callnop) builds his own electric basses.